Quadrotor dynamics: How is torque created

I'm a software engineer and I've recently engaged into Robotics field. I've started by a course on Coursera which talks about Aerial robotics and thus quad-rotors. I'm trying to understand how quad-rotors dynamic works and i'm struggling understanding some key points.

I'm going to explain and make some assumptions based on what i've understood by studying till now, and will ask a specific question at the end, please correct me if i'm wrong.

A quad-rotor is a robot of 6 degrees of freedom, which involved translations in the 3 different axis (X, Y, Z) and rotating over the same axis, which defines the 3 famous movements: Roll, Pitch and Yaw.

The quad-rotor has 4 motors rotating with specific angular velocities, and the previously discussed motions are achieved by regulating these angular velocities. More specifically, when rotating, the motor blades create two type of forces, commonly known as Thrust and Torque. The Thrust permit the robot to maintain a specific altitude, however the Torque is used to allow the robot to rotate.

My question is: how are these forces generated ? what's the physical explanation behind it ?

2- The b is generated due to the existing of Thrust and depends on the blade's length. What i basically understood is that, when an object is rotating over an axe of rotation, a moment is generated (also denoted Torque when the involved quantity is a force), which is no more than the cross-product of both the force and the length between a considered point of that object and the axis of rotation. (Here i'm assuming this force is the Thrust, but my mind is doubting on my assumption, correct me if i'm wrong)

To illustrate my assumptions, here's a picture depicting what i said: 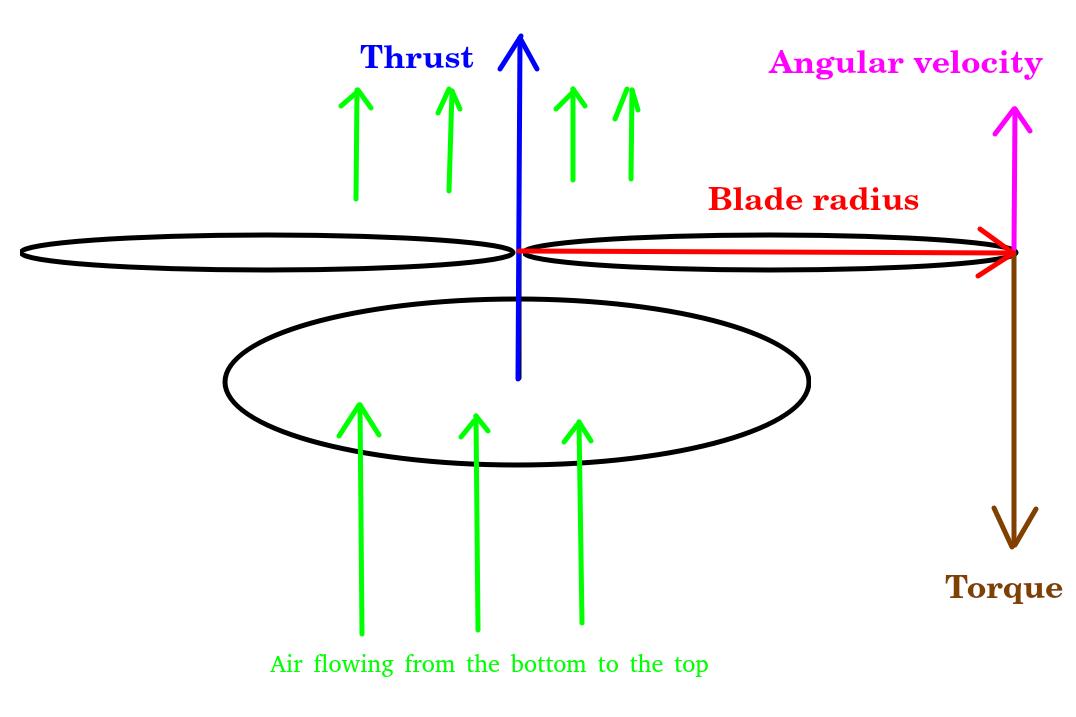 From this picture you can see the flowing air, creating the Thurst, and the Torque represented on the blade's tip, created by the previous Thrust and depends on the blade's length (or radius). More specifically:

The above operation is the Vector Cross-Product

One more question, is about the Torque's direction, i've been reading across multiple sources that it should be in the inverse direction of the angular velocity, but i don't exactly know why.

You're right that each spinning prop creates both a force and a torque.

The force is created opposite the direction of the flowing air; each action has an equal and opposite reaction. The same way you can push away from a wall by pushing onto it, the propeller pushes "away" from the air (up) by pushing the air down.

The torque generated by the propeller itself is, as @billmcc mentioned, produced in opposite direction to the torque exerted by the motor on the prop (the same equal and opposite reaction principle as with the force). This torque is around the axis of the motor shaft, and tends to spin the body of the quadrotor around its z-axis. When the rotor is spinning at a constant angular velocity, this torque is needed to fight the drag the propeller experiences as it moves through the air, as well as friction from the motor itself. If there were no air and no friction, a prop spinning at constant angular velocity would not generate any torque on the body.

There is a second type of torque generated around the z-axis when the rotor speed is changing due to the conservation of angular momentum. This torque is proportional to the rate of change of the angular velocity of the rotor, but is typically ignored in quadrotor controllers since it's quite small for small propellers relative to the other torque (the torque due to propeller drag).

Hope this helps and let me know if you have questions!

Each motor generates torque to spin it's fan. As the fan turns, the quadrotor will experience the same torque on the frame, only in the opposite direction.

This is similar to a helicopter - the tail rotor is needed to counteract the torque from the main engine. If the tail rotor fails, the helicopter will start to rotate in the opposite direction from it's airfoil.

This is why drones always have an even number of fans - half of them spin counterclockwise and half spin clockwise to keep the torque balanced.

The fans convert most of the torque into thrust by pushing air down. The relationship between torque and thrust isn't going to be a simple linear relationship as you suggest. Fan/propeller performance is usually modelled empirically.

Not the answer you're looking for? Browse other questions tagged quadcopter motor dynamics torque force or ask your own question.

42
How to choose the right propeller/motor combination for a quadcopter?
5
Wind force impact on torque mechanical arm
4
Quadcopter PID output
4
How is it possible to maintain the total thrust when controlling yaw of a quadcopter?
2
Transfer function of a quadrotor position controller
3
From a linear force actuator that spans multiple links and joints to the equivalent motor torque
0
What is the most accurate method to calculate Torque of 5 DOF Robotic arm
2
Inertial frame VS Body-fixed frame momentum correction factor