I want to run my bot over a map that has nodes and I am just stuck about how to begin the path planning, I literally searched over the internet and found so many algorithms Like A* , Dijkstra's, etc. But after reading that all I am more frustrated, as I am a beginner in this domain.

Let me explain what I want to do with the help of Example:- 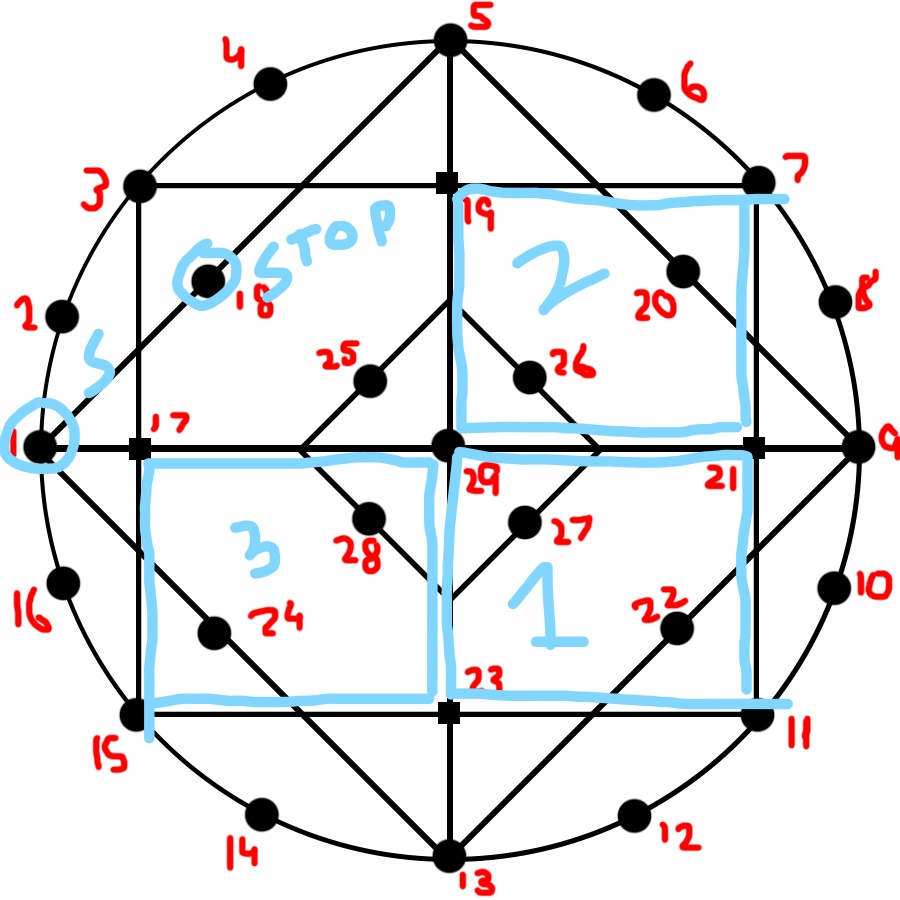 In the above provide map Node 1 is the start position and the blue highlighted box are the area where bot has to go.

After the bot reaches 18 he again travels to node 26 and returns to node 18.

After completing all the runs bot has to come back to node 1.

I want to perform the same like this but how to calculate the shortest path and even how to plan the LEFT and RIGHT turning.

I can code like the counting of the node and turning according to node number but this doesn't seem fun. Fun is in coding the bot for finding its own way to a particular node.

I just need a kickstart to perform this any help from your side is really appreciated.

You have presented a map of the robot. This is the correct first step. Now this map has to be reformulated as a sequence of decision which path to take.

If you do this, you can build a tree. In this tree, each stage (level) of the tree you advance from one note to the other. So, if your start node is 1 this is the first node in your tree.

From the first node, you can have move to 5 paths which lead to adjacent nodes. Let's indicate that these are reachable within one step from the starting node by adding S1 as prefix. Now if we add these 5 choices to the starting node we get:

We can continue expanding these nodes, by listing their adjacent nodes. Usually it is bes t to omit the node you came from into this nodes again and again increasing the depth of the tree. (The tree might not match exactly your map but it is close)

Now if you are in a uniform (and unitary) cost environment the cost of taking a decision, or moving form a parent node to a child node is 1. If you actually calculate distances each edge (line) in this tree will have a different cost which will be the distance metric between the nodes.

Any graph base path planning algorithm will try to build such a tree and the goal is the find the minimum cost path from the start until one of the nodes (leafs) in this tree will be your goal node. The difference is how they get to this path.

Breadth First Search: expands all nodes in the tree going level by level. Starting at the S1 level all S1 nodes will be expanded. If none of them contains the target node, the next level will be extended...and so on

Depth First Search: Similar to BFS, but goes downwards, not sideways. It expands the nodes downwards until there the maximum depth is reached than goes to the next branch.

Dijkstra: It is more efficient then the two above because it uses an internal rule to select the nodes that is more application oriented. For each node expanded is ads cost information about the cost to get to that node. The cost is the edges traversed to get to the node (if the cost it uniform 1) or the sum of costs (e.g. cartesian distance between the nodes). This cost is what selects the next node to be extended. Regardless of the level in the tree, you always select the node for expansion, which has minimal cost.

The algorithm performs better then BFS if the cost is not uniform. It is more ore less the same as BFS in a uniform unitary cost map.

Please note that some implementations and explanations consider the presence of the target node in the open list a stop condition. This is wrong, it has to be the in the open list and has to have the minimum cost in the open list for the algorithm to complete. Otherwise it is not guaranteed that the shortest path is found

Not the answer you're looking for? Browse other questions tagged algorithm path-planning line-following or ask your own question.

2
Help with adaptive fill algorithm for Water Color Painting Robot
5
How can I implement tremaux algo in arduino line follower to navigate and create map?
1
Is it possible for a CC-turn trajectory to not touch the inner circle?
0
Path-following algorithm and suggestions for mecanum robot
1
Path planning for robot car on grid
0
Minimize Waypoints Why Still Maintaining Distance From Objects for Motion Planning?
0
Mobile Bot Maze Solving