Calculate body speed in m/s with weight in the equation?

UPDATE: I have clarified my question for answerers to better understand what I am asking

If I have a flywheel, like the one shown in this image, and I know the torque, weight distribution, and weight. How do I know the drag of the flywheel, and resulting speed of this flywheel in full motion?

Just a heads up, I don't really know anything about physics. 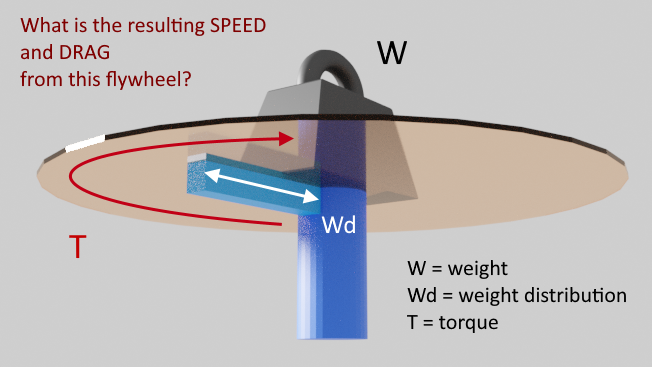 Torque is moment of inertia times angular acceleration. Theoretically, if you could provide a constant torque and there were no losses, you could accelerate to an infinite speed even with a small torque.

In reality, though, losses exist. Frictional losses are based solely on load weight, like static and dynamic friction in a bearing. There's also viscous damping, which is proportional to speed.

Given "enough time," your speed will equalize because the damping losses will exactly equal the applied torque. If you know how much torque you're applying and what the steady state speed is, then you can calculate the losses.

If you know what the damping constant is then you can calculate the ultimate speed for a given torque.

If you don't have either then there's nothing really you can do, though. You can try to get numbers from other systems but little differences in fiction could make the difference between 10,000 and 30,000 rpm, for example.

6
How do I design for a target speed?
1
Torque of coreless DC micro motor
5
Relationship between motor torque and acceleration
1
Which kind of motors and how powerfull should they be for a robotic arm
0
Thrust and Torque on Quad Rotor
1
Effect of platform speed (how fast it is moving) on the quality of SLAM
0
Do hobby servos respond to step inputs with a step in torque?
1
How to calculate operating torque and holding torque of a slew drive for a manipulator arm?
1
Q: Motor sizing for reeling application
0
Should I be using the old clutches with VEX 393 motors?