How to make my robot move parallel to edge of the table?

I have an autonomous differential drive robot that moves on the floor and its purpose is to always move parallel to the longer edge of the table (just assume that the table never ends). It looks something like : 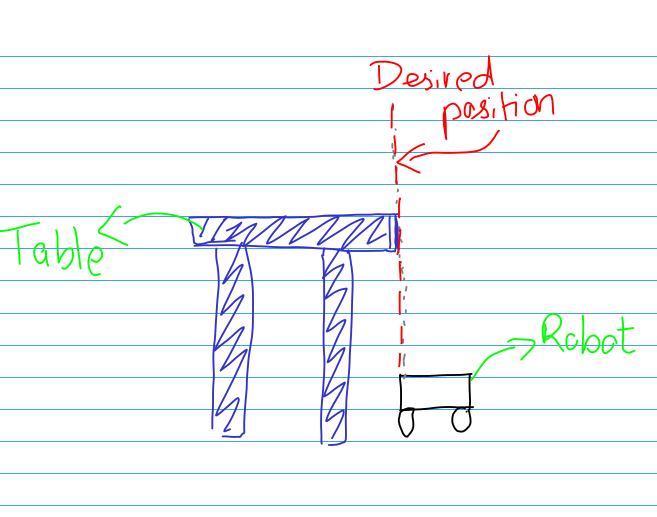 Now, the robot will be using this same method to align itself to the table edge for the first time. Also, when it travels forward (along the edge), it is prone to deviate from its path due to various reasons. Again, this method will guide it to stay on the right track.

Actually, you are quite wrong, the way I understand the problem. It is a line-following. It is just that the line is not painted (like on the road). The line is the edge of the table.

The way I see it, your robot needs to look up, and detect the line "painted" by the edge of the table on the ceiling. Once the line is detected, just follow it.

I have in mind 2 ways to detect the edge of the table. 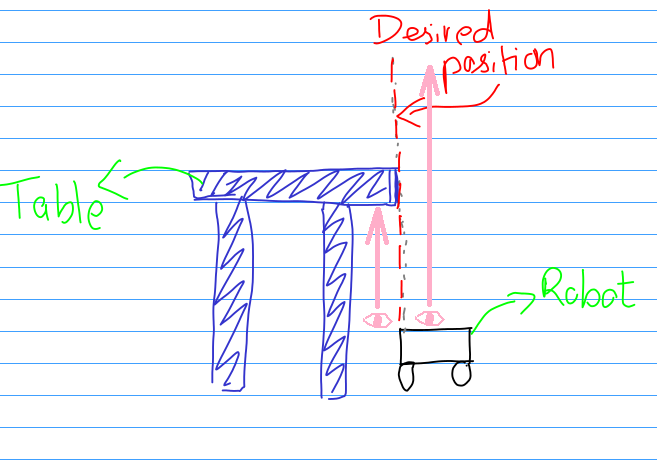 The problem you are describing is quite similar to line following from a controls perspective, there is a difference in how the line is detected.

Line following robots use a wide variety of ways to detect line. Simplest is probably photo-resistors or phototransistors, however magnetic stripes (lines) and hall effect sensors have been quite popular in the industrial world some years ago.

The edge is your line, but you still have to map this to the line you want to follow. The line being in the middle of the camera image is not necessarily what you want, but you can apply simple transformations to make this line your path to follow. If you can deduce a signed distance function (negative distance one side of the line, positive distance on the other side of the line, zero on the line) you can use this signed distance function as an input to your line following controller.

The only difference to a more common line following approach is how you detect the line and com up with the current position relative to the line. Everything else is like a classical line following problem.

Not the answer you're looking for? Browse other questions tagged sensors differential-drive precise-positioning or ask your own question.

11
How can I detect the edge of a table?
1
How to program parallel PID control loops? So I can give my robot multiple set points to follow
4
How do the PID parameters (Kp, Ki, and Kd) affect the heading of a differential driving robot when they are increased individually?
2
Making a robot move straight between two maze walls
4
How to move robotic arm in straight line
0
How to get the accurancy of the position system?
1
How do robots move parallel to a wall/line?
0
How to use SLAM generated map to navigate my robot to the destination?