I am trying to compute the joint velocities a 6-DOF manipulator(a typical industrial robot).

Vx, Vy, Vz are easy to compute. At every scan, I compute:

Then I compute the magnitude:

The velocity is set by the user in mm/s, e.g. Vo=5mm/s. It is interpolated by a t factor [0-->1](a function of time), which I compute using the first derivative of a 5th order polynomial, to provide smooth acceleration, deceleration and zero final velocity.

I use the velocities above to multiply with the 6x6 inverse jacobian the result are the joint velocities, with no orientation change of the robot end-effector. Everything works fine. The robot reaches its goal position as expected following an expected linear path.

Now I going to the main topic of my question. I want to interpolate the orientation velocities as well [w1, w2, w3].

I have done a lot of research and reading and still could not figure out. I learned that I can't just subtract the orientation angles e.g. [T1f - T1i] and divide by total time to get velocities.

Every scan my system computes new t value factor(that progresses over time) which I use with SLERP to give me the next computed orientation:

qN=SLERP(qI,qF,t), which is the next interpolated orientation.

I compute the current end-effector orientation in quaternion: qC, and subtract qN - qC to give me the displacement to use as orientation velocities.

Then I convert qV to ZYZ angles in radians:

Unfortunately, this approach does not work. The robot does not interpolate correctly to the final goal position.

I have read a lot of literature and posts approaching this same topic:

Controlling the pose of a manipulator using inverse kinematics

I would appreciate it if someone could point me in the right direction. I would like to stick with this approach using the inverse Jacobian and not use IK.

Note: My system is a PLC(industrial programmable controller)and there are no built-in complex math libraries. So approaches using simpler math functions would be better. All of the main math functions had to be implemented by me, e.g matrix dot product, matrix inverse, transpose, quaternion conversion, SLERP algorithm, ZYZ conversion, Jacobian inverse, etc. I have tested my functions comparing the results with online tools and I'm confident my implementations are working correctly.

Below I illustrate my problem:

I was able to figure out after digging further through several other posts and google searches.

Then the result is: 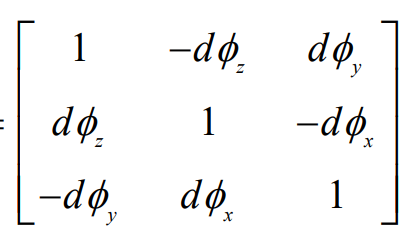 Then dividing each component by the scan-time(compute time between current rotation and next rotation) results in the orientation velocities:

After testing with several goal poses the results seems to be satisfatory, the robot interpolates correctly following the expected linear path and end-effector orientation change.

Not the answer you're looking for? Browse other questions tagged kinematics industrial-robot orientation trajectory or ask your own question.