im going through the odometry motion model proposed by Thurn in Probabilistic Robotics famous book and i have some questions concerning the kind of command that we can use. I will explain more my problematic below :

The odometry motion model from Thurn is :

So the motion of the robot depend on the previous state AND the three basic motions described as : 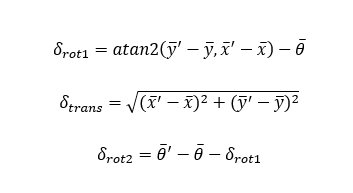 This three basic motions are computed from a relative position acquired from sensor readings, but in most books,publications that i read, this sensor readings refer to odometry(encoders) readings. So im wondering if i can use for example the relative positions given by ICP scan matching methods in the odometry motion model described above OR i have to use it directly as motion information in the prediction step of particle filter for example.

In "An Improved Technique for Robot Global Localization in Indoor Environments" article, they use ICP results to compute motion of robot but i dont understand if it used in an odometry motion model or it used directly.