Are there any GPS sensors that provide data at 1Hz or faster?

I searched for GPS devices that provide 1 sec updates to server, but I have not found any.

Are there any products that take less than this time?

Why do gps devices take this much time to send data?

Many GPS receivers will output data more often than 1Hz. For example, the Venus GPS, which can produce readings at 10Hz. 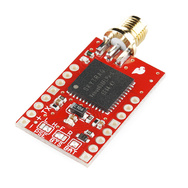 The 1-second processing time is based on the fact that GPS technology uses CDMA to allow the receiver to pick up all satellite signals simultaneously.

For GPS to work, your receiver must perform several steps:

(Step 0) Locate which satellites are overhead (this can be assisted by something called an almanac). This step only happens when the unit is first powered on.

Notice that each satellite's signal has its own code, which helps it stand out from all the other satellite signals. Simpler GPS units will process these decoding steps sequentially, while more sophisticated units use multiple receivers to process the signals in parallel.

You can further speed up the reporting rate of a GPS by combining the updates with an estimation based on odometry, an accelerometer, etc.

Not the answer you're looking for? Browse other questions tagged sensors gps or ask your own question.

5
Send Arduino sensor data to server with GPRS shield
5
Are there surface texture sensors for integration in circuits?
5
Solution for INS and GPS integration
0
Cheapest GPS that is accurate to ca. 30cm in woodland
0
GPS message: compute ephemeris data and pseudo-ranges from subframes
3
I fused a GPS and IMU and I am wondering if my results make sense
0
Are there solid state directional sensors available?