I have a robot (gray box in the picture) that I can rotate in 3D (x, y, z) relative to a center of rotation.

Let's say that this robot has two sensors with fixed poses in the robot:

The goal is to find the pose (position and rotation) of the velocity sensor relative to the IMU.

). So in the end I can find the position of the center of rotation relative to both sensors in their own coordinate frame.

But is it possible to find the rotation (q) between the two coordinate frames? 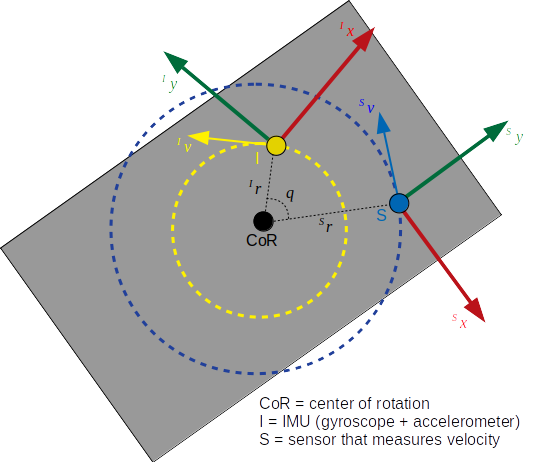 Browse other questions tagged sensor-fusion calibration or ask your own question.

28
How to fuse linear and angular data from sensors?
9
Calibrate a 2d scanner mounted on a rotary axis
8
Accelerometer, gyro, and magnetometer sensor fusion in 2d
5
Simple Sensor Fusion for pose estimation
5
Solution for INS and GPS integration
2
Aligning datasets with drift
0
How does one estimate motion from sparse encoders and IMU-Gyro data?
0
How do I calibrate a rotating laser scanner pose from known global coordinates?