I am currently working on OMRON pick-and-place robots. Basically, the overall layout of the system is similar to what is shown in the following picture:

The system has a rotary encoder that reflects the conveyor belt motion.

The calibration can simply be completed after teaching 3 points on the belt as shown in the following image:

The steps are as follows:

After I followed these steps for a test robot in hand, I got the following quantities:

Let b = [bx by bz] be a belt point. Since the belt motion is having a magnitude along the x direction, then the scale factor in units of mm/pulses can be calculated by:

Along with this scale that we get during calibration, we need to calculate all members of the transformation matrix T which relates belt coordinates with robot coordinates. This has the rotation matrix R and translation matrix D. $$ p=Tb = \begin{bmatrix}& R & & D\\ 0 & 0 & 0 & 1 \end{bmatrix}b $$

Since b always has one component along the x axis of the belt, then the coordinate of the first calibration point with respect to belt coordinate is (Belt did not move yet): $$ b_1 = \begin{bmatrix} 0 \\ 0\\ 0\\ 1 \end{bmatrix} $$

and the coordinate of the second calibration point with respect to belt coordinate is (Belt moved from P1 to P2):

Therefore, from P1 calibration, we have:

As seen, the first column and 4th conform with the results that we got. However, I am not really sure what the mathematical way to follow using the third calibration point to calculate the rest of the transformation matrix that I have. How would I be able to calculate r12, r22, r32, r13, r23 and r33?

I have tried your equations to find P4 for a sample coordinate that I got from the Google Sketchup 3D Designer, however I am getting big illogical values a and b and consequently for its x, y and z. I created a Google sheet which contains the design with assigned values of each point and I also implemented your equations in it to calculate a, b, and P4 as well as $\vec v_1 = P_3 - P_4$ and $\vec v_2 = P_1 - P_4$. Here is the link for this sheet that I shared and can be publicly edited:

Why I Need to Know This in The First Place!

I am an experienced software engineer with robotics and control engineering qualification. I am planning to program 3D models and create a simulation platform and solve a problem in hand for the robotics world. Clear understanding of this field in mathematics is required.

A general approach would be to construct a so called axis-angle representation and convert that to a rotation matrix representation.

On order to do so, one could start with a normal vector of the triangle.

Let's take the $P_1P_2$ line and construct the perpendicular of the triangle from $P_3$ to $P_1P_2$. Let's call $P_4$ the point where the perpendicular intersects $P_1P_2$ .Based on this answer the coordinates of this point can be found as:

Applied to the coordinates described in the attached google sheet file the triangle (in blue) and the perpendicular in red is presented in the following figure: 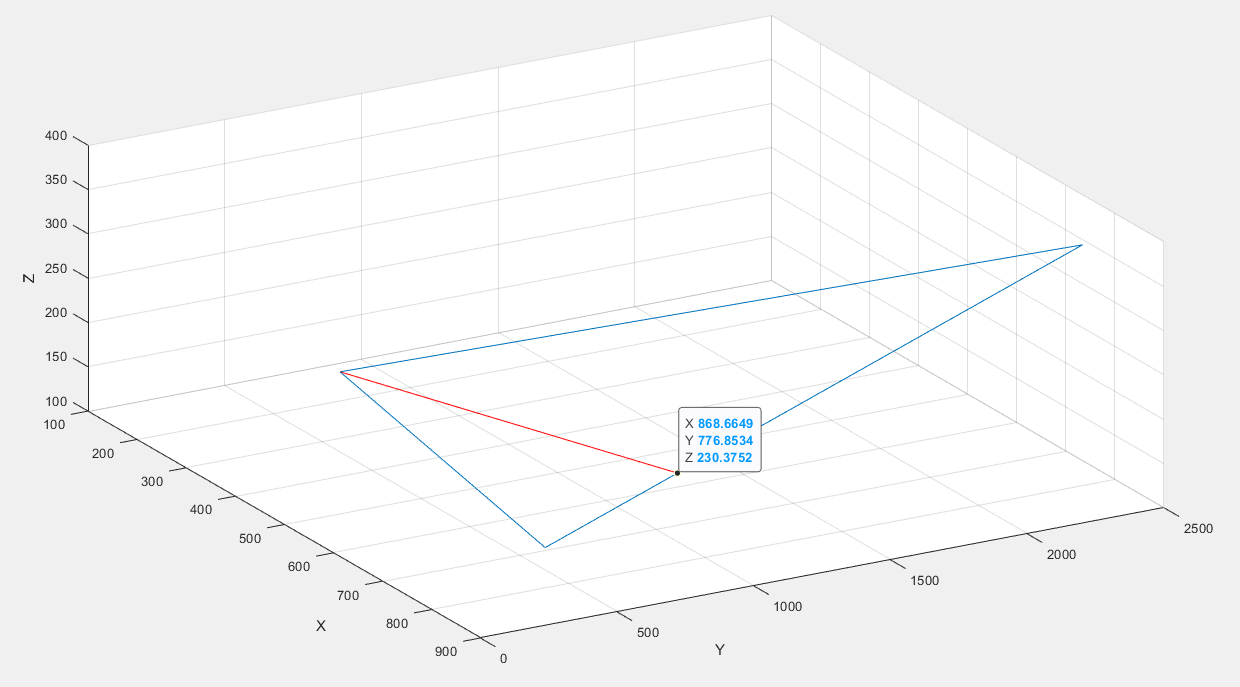 We can now construct 2 perpendicular vectors, in the $P_1P_2P_3$ plane which share their origin in $P_4$

The cross product of these two vectors will be the normal of the $P_1P_2P_3$ plane.

Please note that $\vec v_2$ has been chosen as $\vec x_n$ based on the additional information in the question, that $P_1P_2$ is parallel to the $X$ axis of the belt/rectangle frame.

Not the answer you're looking for? Browse other questions tagged rotation movement transformation matrix coordinate-system or ask your own question.