My Raspberry Pi is losing power in a surge

Every time we go full power*, there is a lack of voltage and the Raspberry Pi seems to hard reset.

I am not an expert in electrical circuits, but some of the suggestions are to use a capacitor to provide the missing 5 V in the interim. How do I prevent the Raspberry Pi from dying in the event of full power?

Since you're running directly from a battery I would say it's safe to just add as much decoupling (in other words caps across your input power) as possible, since the only real downside (that I think is relevant to your setup) to adding a lot of capacitance is increased in-rush current (since the capacitor naturally acts as a short-circuit during charge-up).

In certain circumstances however the high current draw associated with excessive decoupling during initial start-up should be avoided. An example is when you use a switching converter to step a voltage up/down. If the converter has built in over current protection (and no slow start feature), the short-circuit caused by the uncharged caps will cause the converter to stagger (starting up, over current and starting up again), and never fully reach its target voltage. However, since you're running directly from a battery this shouldn't be a problem, since a battery can be driven way above it's rated current capacity (for short periods).

Another thing to also remember is that since there exists a large energy store across your power rails (the capacitors), the system might take a while to discharge (after being powered off). In other words, your Pi will probably run for another 30 seconds (depending on how much capacitance you add) or so after you disconnect your main battery.

Finally, always try to add capacitors that's rated at at least twice your operating voltage (for instance, if you have 6V batteries try to get 16V caps). Motors that reverses their direction very quickly may induce sufficiently large voltage spikes back into your system, and cause your caps to explode (hopefully your motor driver has sufficient clamping diodes).

I would say a single 1000 uF electrolytic cap would be more than enough decoupling. If your Pi continues to brown-out, I guess the more appropriate cause would be your batteries not being able to supply the required current. Remember, the reason you Pi is restarting (or browning out) is due to the supply voltage dipping because the batteries are unable to supply the current the motors require. Adding capacitors will help with surges in currents (such as motors accelerating), but obviously won't solve long term high current draw.

It sounds like you're experiencing a "brown out" caused when the excessive current draw from the battery causes a drop in the supply voltage. This is due to the fact that batteries have internal resistance (a.k.a output impedance).

In this example, if the load drops to $0.2\Omega$, the internal resistance of the battery will cause the output voltage to be divided equally with the external resistance -- the load will only see 5V. It's possible that your 6V supply is dropping to 3V (or less) under load, in much the same way.

A capacitor will delay this effect, but what you really need is a voltage regulator -- many are available in an integrated circuit (IC) package. Some voltage regulators will step up voltage when insufficient, but most simply lower a supply voltage to the voltage needed by a component like your RPi (in which case, your battery voltage would have to be increased so that it never dipped below 5V under full motor load).

Alternatively, you could use a separate battery pack for the RPi. This is a common solution for mobile robots, because it ensures that when the robot is immobilized due to lack of power, radio communication with the onboard PC will not be lost.

I must agree with the other two answers, however the main issue is that you do not have enough voltage into your regulator (I see from your comment to Ian that you are using a Pololu D15V35F5S3 Regulator). If you refer to the Pololu D15V35F5S3 Product Description, down at the bottom you will find the following graph: 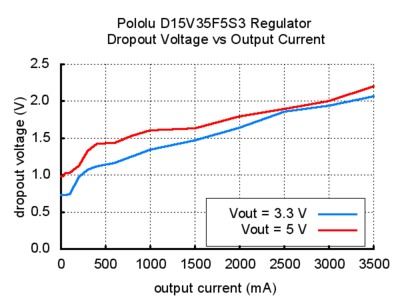 You either need a higher input voltage, a lower dropout regulator (this may be difficult and insufficient), a different regulator (buck-boost), or a different power source for the Pi.

Not the answer you're looking for? Browse other questions tagged raspberry-pi electronics esc or ask your own question.