Hello Robotics Stack Exchange. I am trying to put frames to this robot so I can make forward and inverse kinematics. However, when I use the DH parameters I do not get the same results as roboDK (a robot visualisation program). 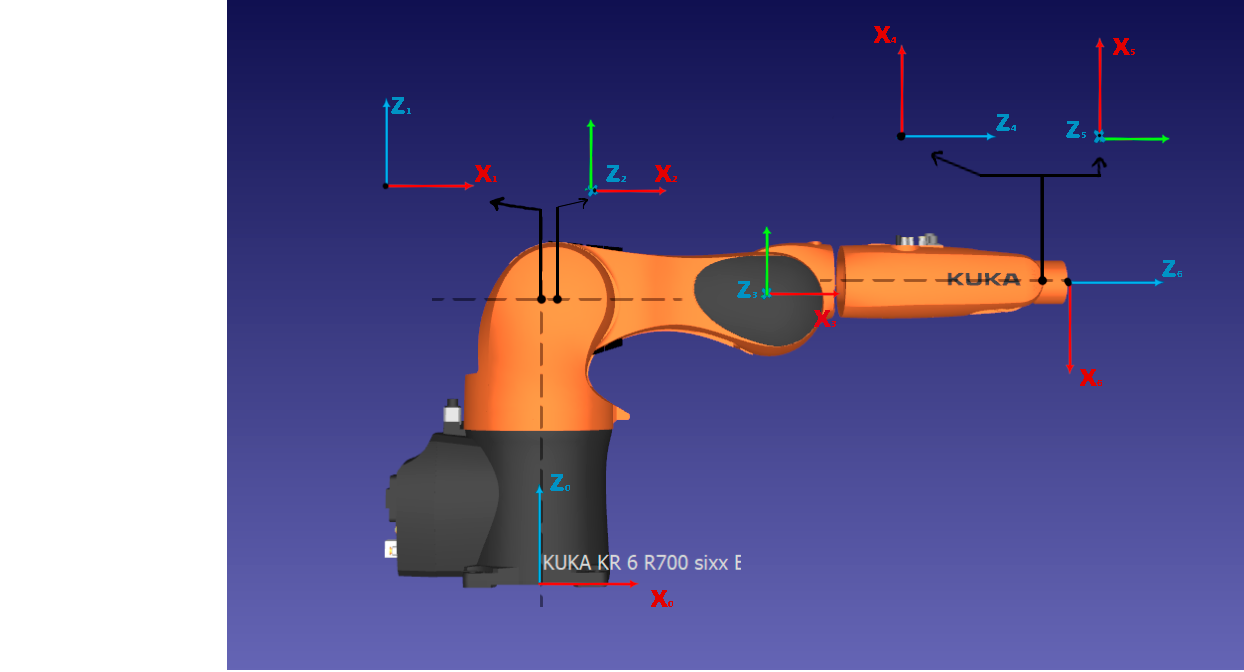 Here are my reasoning for putting the frames there, showing my reasoning I believe will show my mistakes to those more knowledgable than me hopefully.

-1: First i identify the joint axis. The second joint axis is displaced 25 mm to the side according to the data sheet so that's why its moved in the illustration.

0: Then I put a base frame. The base frame I chose to be exactly as the first frame since i want zeros in my data sheet to give me fewer variables when I need to make inverse kinematics later on.

2: Frame 2 is there because the next link is parallel with it. Now z_2 is pointing into the page and x_2 is pointing towards the common perpendicular.

4: Frame four physically is at joint 4 but the origin is at frame 5. That is because frame 4 intersects frame 5 at the z axis. X_5 points toward the common normal.

5: Now z_5 and z_6 do intersect but we chose that it has to be where frame 4 is because they already intersect. So the origin is at the same place as 5.

6: Z follows the axis of rotation. The x_6 axis looks down because that's what the roboDK said it looks like. We want our calculations to match with that program and the last frame is also arbitrary because it does not have any link after to compare after it.

This was my reasoning. I hope someone can spot my mistake in my reasoning because I am sure I can do the DH-parameters from the frame description so the problems must be with the frames themselves. Thank you.

I have studied manipulators kinematic by Craig book "Intro to robotics". Based on this book you must consider frame 0 and 1 co-incident. Look at this much similar example in this book: 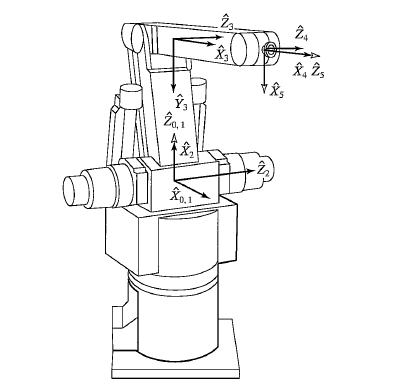 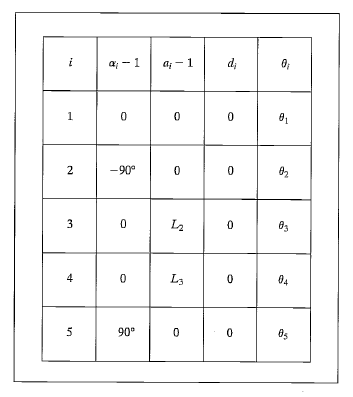 Not the answer you're looking for? Browse other questions tagged kinematics inverse-kinematics industrial-robot forward-kinematics dh-parameters or ask your own question.

7
Is there a way to determine which degrees of freedom are lost in a robot at a singularity position by looking at the jacobian?
9
Forward Kinematics/D-H parameters for perpendicular joint axes
5
How to determine x-axis if the two z-axis are intersecting in Denavit Hartenberg representation
2
Find orientation through Transformation matrix
1
Modified DH Parameters for Puma 560 - Wrong Results
2
Forward kinematics equations
3
Expressing a global point in different frames
1
4 Axis Gimbal Nodal Robot DH Parameters
1
Denavit Hartenberg parameters for 3R spatial manipulator - excercise