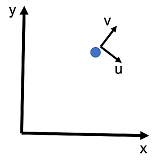 I now want to track the estimated pose of the robot in the global frame, using a Kalman filter. I know that my observation noise is Gaussian, which is one requirement of the Kalman filter. The other requirement is that the dynamics model is linear. Most examples of this type (global position frame, local velocity frame) I have seen say that the Extended Kalman filter is needed. However, I am not sure about whether this is true for my case, because my velocity sensor has zero error. I have two ideas:

2) Even though the motion model as zero noise, the dynamics itself is still non-linear. This is because to transform from the local frame to the global frame requires a rotation, which is a non-linear function since it involves sin and cosine functions. There may be zero "extra" uncertainty caused by the motion, but the motion model is still non-lienar. Therefore, I must use an extended Kalman filter.

Please could somebody explain which is correct, or if neither, what the correct solution is?

The reason that a Kalman filter requires a linear system is that a gaussian distribution loses its properties when transformed with a non-linear function. Although your transformation from local to global frame is a non-linear function, since your velocity measurement has no gaussian noise associated with it, you dont need to worry about the requirement for linearity. That being said, in the case that you perfectly know you initial pose, then you can just transform the perfect velocity measurement from the local frame to the global frame and find the new pose without any uncertainty. So if you have the perfect initial state you would not even require a filter.

Not the answer you're looking for? Browse other questions tagged localization kalman-filter ekf filter or ask your own question.