Hello robotics stack exchange community, hope my message finds you well during these challenging times. I need an opinion regarding path planning algorithms.

I am looking for a path planning algorithm that is able to produce smooth paths that are shorter and more predictable than RRT and RRT*. It shouldn't get stuck in local minima like Artificial Potential Field.

I have set up a Linux 16 system with ROS Kinetic Kame and Python. I implemented Artificial Potential Field Path Planning, RRT and RRT* and ran those on a robot in a small arena. The arena was a square and I placed different objects inside of it that needed to be avoided. See the picture below for an example of how my arena configuration looks like. 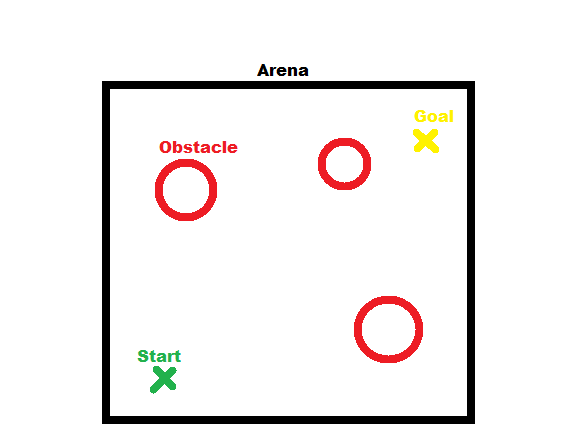 Artificial Field Path Planning creates nice, smooth curves and a robot executes smooth movements to follow it. My problem with them is local minima where my robot gets stuck.

RRT produced jagged paths, but the nice thing about it was that it always found a path (albeit it was always a different one). I implemented RRT* to get smoother paths, but they're quite "branchy" looking (still better than RRT though).

I have also looked into other algorithm such as A* and MEA, but rather than trying to implement them straight away, I wanted to ask for your opinion.

My understanding is that most people don't use the raw RRT solution directly. First they smooth it. A google search will yield many papers on this. For example: Improved Path-Finding Algorithm for Robot Soccers by Rahib H. Abiyev, Nurullah Akkaya, Ersin Aytac, Irfan Günsel, and Ahmet Çağman.

The smoothed trajectory will necessarily be different than the RRT path and will therefore have a possibility of collision. So you will have to check for that and possibly adjust the smoothing parameters iteratively.

You can apply rrt using a selection of smooth movements, basically you discritize the possible actions making sure you always connect paths in a way which is smooth. It increases the dimensionality of your problem by quite a bit though, so idk.

In my experience, I would encourage you to deep further into A* derived planners for your use-case. More specifically, take a look at Hybrid A* which takes into account continuous values within the discrete grid, thus allowing motion constraints to be taken into account.

Not the answer you're looking for? Browse other questions tagged ros python planning or ask your own question.

2
redundant arm path planning and trajectory following
12
What is the best way to compute the probabilistic belief of a robot equipped with a vision sensor?
1
Is MoveIt! suitable for fixed-wing aircraft path planning and obstacle avoidance?
3
A* algorithm for Arduino robot path planning
2
Path Planning algorithm