How to calculate the right and left speed for a tank-like rover?

I am trying to control the Rover 5 robot using an Android app with a touch-based joystick control in the app UI. I want to calculate the speed of the left and right motors in the rover when joystick is moved.

From the joystick, I get two values, pan and tilt. I convert them into the polar coordinate system with r and theta. Where r ranges from 0 to 100 and theta from 0 to 360. I want to derive an equation which can convert the (r, theta) to (left_speed, right_speed) for rover. The speed values also are in the [0;100] range.

Now, here is what I have figured out till now. For any value of r,

For other values, I want it moving and turning simultaneously. For example,

So, basically for any (r, theta), I can set speeds as,

I need to formulate an equation where I can generalize all these cases by finding alpha and beta based on theta.

How can I do this? Is there is any existing work I can refer to?

You're trying to find a formula to convert a given $(r, \theta)$ to left and right thrust percentages, where $r$ represents your throttle percentage. The naive implementation is to base your function on 100% throttle: 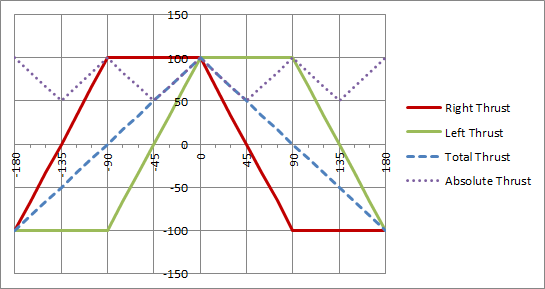 The problem with this implementation is that you are only providing the desired $r$ when $\theta$ is at an exact multiple of $90 ^{\circ}$. At all other points, you sacrifice total speed for control. You can see this in the graph: "Absolute Thrust", the amount of thrust being delivered by both motors, is not (and cannot be) constant in this regime. Simply scaling this function is not optimal.

The maximum absolute thrust that can be sustained over the entire range of $\theta$ occurs when $r=50\%$ -- this is what your function should be based on. 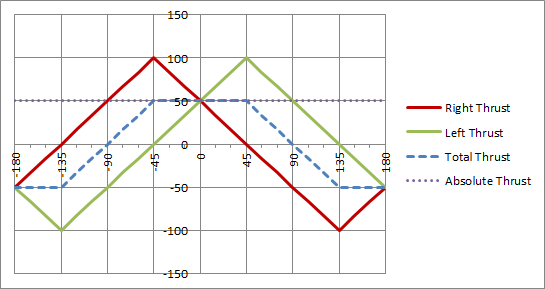 In this implementation, total thrust remains constant between $\pm45 ^{\circ}$, and absolute thrust is constant no matter what direction is chosen -- the motors trade off their thrust to maintain the desired $r$. Above $r=50\%$, the range of angles where your total thrust can satisfy $r$ begins to shrink -- you begin to sacrifice control for speed.

The result is the following:

What you want is angular velocity proportional to the cosine of the angle, it seems, with positive to the right, and negative to the left.

Swap the velocities for the other quadrants. Note, this won't "feel" like driving a car, as moving the stick to the lower-right will turn backwards and rotate right, whereas a car in reverse with the wheel right will move backwards and turn leftward. Just a weirdness of differential drives... You can adjust for this by just applying the fourth quadrant rules to the third quadrant $\theta$ and visa-versa.

$\theta \gets \text{atan2}(\sin\theta,\cos\theta)$ (watch your units though, atan2 is usually radians.

Not the answer you're looking for? Browse other questions tagged control kinematics movement or ask your own question.

21
How can the inverse kinematics problem be solved?
4
How to invert D-H parameters
3
How to design a differential steering mechanism?
15
Calculate position of differential drive robot
1
How are the optical encoders used in platforms like Rover 5?
2
How do I calculate the direction robot is facing, pose from velocity and yaw rate?
2
Constant Offset matrix
2
How do I convert centre-returning joystick values to dual hobby-motor direction?