I want to measure the end-effector position of the robot that I attached. I'm using both gy-25 and gy-521 for calculation of the angle. As shown in the picture, joint 1 has 2 DOF, one for spatial movements, and the second one for planar rotation. The angles of the planar movement of joint 1, measures by an encoder. Each of joint 2 and 3 has 1 planar DOF, and the angles are measured by gy-521 and gy-25. I want to measure the angular rotation around the first joint's spatial axis and planar rotation of joint 2 with gy-25. The planar rotation of joint 3 measures by gy-521. If I rotate the first joint around its spatial axis or rotate the joint 2 in the plane, the values of the roll, pitch, and yaw of both gyroscopes change which means that the rotation is a combination rotation around multiple axes because the gyroscope reference frame is global, but the rotation isn't around one of that reference frame's axes. So I want to transform the angles which are in the global frame to be measured in the local frame of the sensor, but I don't know. Can anybody help me with that?
Thanks in advance 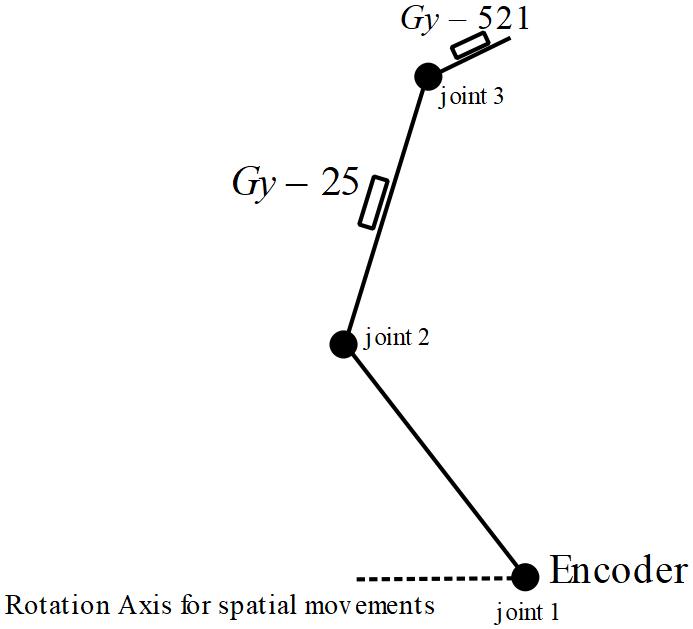 In my real system, you should rotate the figure 90 degree CCW and with this configuration, if you fix joint 2, joint 3, and joint 4 and just rotate around joint 1 (theta1), then all the values of both gyroscopes change. So I need to transform the gyroscope values from their frame into the global frame so that I can measure theta 3, 4, and 1. I know I should use the transformation matrix, but I know how to calculate that based on the gyroscopes values.

Browse other questions tagged arduino gyroscope forward-kinematics or ask your own question.

7
How are units of noise measurement related to units of a sensor's data measurement?
5
How to choose the state space model for 1 axis gyroscope to implemnt a good kalman filter
0
Quadcopter Flight Controller:Why does Using gyroscope data give better results?
2
Forward kinematics equations
3
Compensation for IMU mounting misalignment
0
forward and inverse kinematics of arm
9
Accelerometers in a self-balancing robot, can't we do better?