I am working on a project to build a remotely controlled underwater robot to work in pure water tank. The max depth the robot has to dive is 40cm, and the robot has no over-the-water antenna.

I found a video Robot Underwater Singapore Robotics Games 2016 and the following picture similar to the robot I want to build: 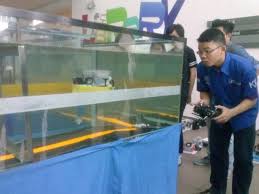 These have no over-the-water antenna either, so I believe an RC controlled underwater robot should be feasible.

In an answer on my question RC transmitter/receiver for underwater robot) it was suggested that an RC signal wouldn't be able to penetrate water to that depth, that a 1MHz signal would travel no more than 25cm deep in seawater (rather than fresh water), and that 2.4GHz would be much shallower than that.

I personally tested the 2.4GHz RC control, which could control the robot at about 10cm underwater, which is much larger than is suggested by the previous answer.

I know the higher the frequency, the shallower the electro-magnetic signal could penetrate water, so 2.4GHz wouldn't reach 40cm below water surface. But how about lower frequencies, such as 433MHz, or even those below 100MHz, like those used in RC toy cars?

Browse other questions tagged underwater auv or ask your own question.