I found many tutorials and online calculators for the selection of dc motor to drive wheel, I understood how the torque affect the driving of wheel.

But what happen when I change the orientation of motor and load? What is the main criteria for a dc motor to work when I want to rotate a plate which is vertically mounted on motor's shaft, when the motor is placed vertically also (as shown in the picture)? 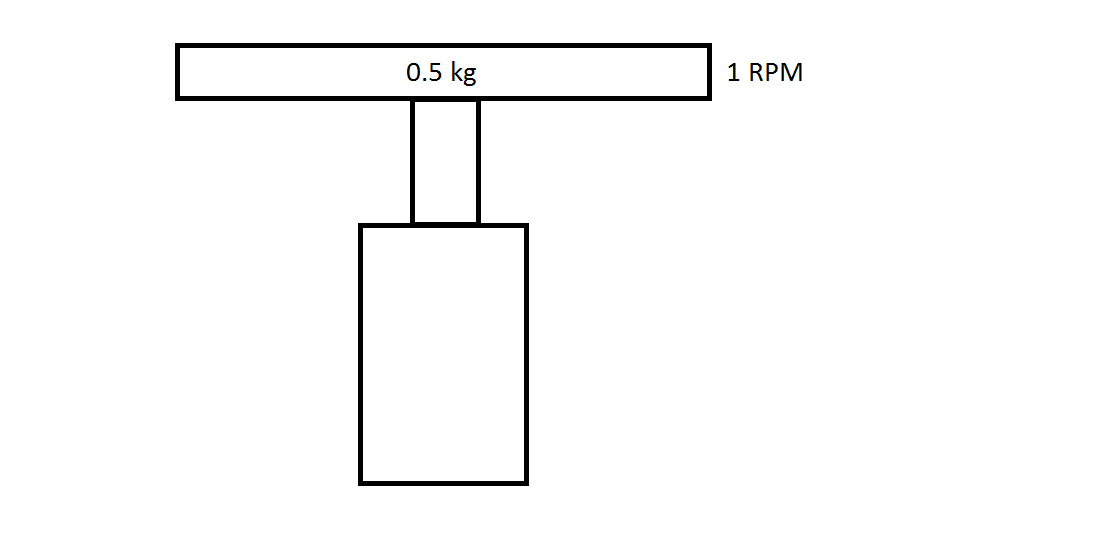 I am not an engineering student so please provide me an answer as simple as possible.

I would say that the main criteria for a motor mounted in this way would be to ensure that's it's balanced, equal to it's middle position and well supported and secured to it's base.

You will have centrifugal force wanting to pull the centre shaft outwards. This force will increase the faster you spin the plate. The torque calculation should be the same but you might need to take into account the weight (if any) acting down on the motor's shaft. Also make the plate as light as possible as this will reduce load bearing on the shaft and reduce the centrifugal force.

But in practical terms your 0.5Kg wheel moving at 1 rpm will show very lift of this effect unless the diameter is huge. For normal size wheels at 1 rpm you can ignore this.

I don't know how to calculate toque in this kind of vertical setup. All information i found on the web always lead me to the torque calculation for motor driving wheels(which is simply the tangential force multiply the moment arm).

The torque is the tangential force multiplied by the moment arm, no matter what the orientation.

Since practically all of the mass of a bicycle wheel is at the rim, the moment arm of that 1 m diameter wheel is 0.5 m. (Other kinds of objects have more mass nearer the center; for the same total weight and diameter, they have lower moment of inertia and so require less torque).

If you were willing to gradually bring it up to speed over a longer time, then you would require less torque. (Lots of standard NEMA 17 motors can easily supply 20 Ncm of torque).

Once it is up to speed, the motor only needs to supply enough torque to overcome the dynamic friction in order to maintain that speed.

Motors are generally designed to supply torque, not handle heavy radial-thrust loads. If the stuff you want to turn is unbalanced, spinning it at high speeds causes radial forces ("centrifugal force", aka "unbalanced washing-machine effect"). As OricTosh pointed out, this has no effect on the torque required from the motor or the energy required to turn it; but you may need to either (a) add more weight on the other side to balance it, or (b) add a bearing or two to support those radial forces, or both; to prevent those loads from pushing the motor rotor "sideways" enough to cause damage.

Motors are generally designed to supply torque, not to handle heavy axial-thrust loads. If you have a heavy load on a vertical axis, you might need to support that load with a thrust bearing (perhaps on the "other" end of a double-shaft motor -- Single-shaft vs Double-shaft motors ) to prevent the load from pushing the axle through the motor enough to cause damage.

3
What should I be looking for in a DC motor that will be used in a UROV thruster?
2
Verifying motor selection calculations
2
2Nm small motor
1
Torque of coreless DC micro motor
8
Simple equation to calculate needed motor torque
0
Permanent Magnet DC Motor Calcuations
1
Starting and stopping a heavy rotating disc
1
How to maximize stall torque of a motor