State of a Robot

I saw the expression "robot state" in many articles and resources, but I could not understand what that exactly mean.

What does state of a robot exactly refers to ?

To extends the answer from the_parzival a bit:

There are different kind of robots so that 'robot state' can have different meanings. If you have a drone or Roomba-robot, the most important state is related to its pose (position, orientation, speed, acceleration, ...). Other states are the Battery state, Motor speeds (and temperatures), essentially every value of your system that can change over time.

The other group of robots have a fixed position, but are themselves more complex: Robot arms ( or CNC mills and similar machines). Their base has a fixed position, but their position is described by a set of joint angles (and speed, acceleration,...). In this case, the robot state can be the set of angles, or also the pose of the end-effector (or a combination).

So the 'robot state' depends on how your robot looks like and what you are interested in.

The state of the Robot refers to the properties of the robot that you want to estimate. If you take a 2D robot as an example, then you might be interested in its 2d position which refers to $$ X(t) = \begin{bmatrix} x(t) \\ y(t) \\ \end{bmatrix} $$

If you scale your robot to 3d and want to estimate its orientation and position, then you may want to add quaternion(orientation) to your state vector

The answer by parzival is only a partial answer. Especially with robots with more than 3 axes, the matrix cannot be solved for a deterministic state, a famous example of this is Dirac's belt trick, where with only the 3 DOF that a human arm and shoulder provide, you cannot have any deterministic state using the matrix provided above. The true state of a robot is actually represented by: $$ J_{s} = \begin{bmatrix} J_{1} \\ J_{2} \\ J_{3} \\ ... \\ J_{n} \\ \end{bmatrix}$$

Where $J_{n}$ is the absolute rotation or linear distance from zero of joint n. Hereon, this is referred to as the $J$ matrix, and the matrix in parzival's answer is the $X$ matrix.

Let's do an example. Here is a 6-axis robot (Joints highlighted) with a Cartesian absolute of [780,65,200,-180,0,90] where the parameters are [X,Y,Z,yaw,pitch,roll], in mm and deg. This is also known as Euler-Cartesian, or XYZWPR representation. most industrial robots use this. It's very rare to see Quaternion-Cartesian representation. 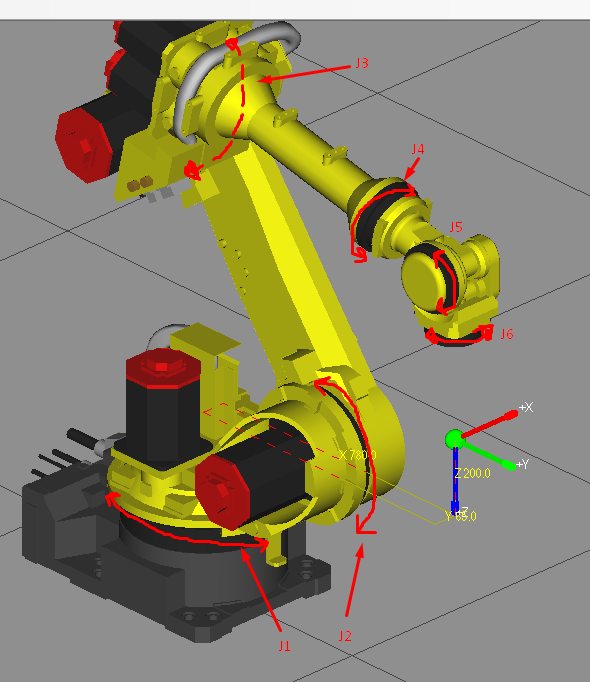 So what's the deal with these two positioning systems, and why use $J$, and not $X$? The answer is a P vs NP problem. To convert $J$ to $X$ is trivial, and does some vector addition you probably learned in secondary school. just take the angles of all of the joints, and add on the magnitude to get XYZ components, and add those components together to get a final position. Converting from $X$ to $J$ however, is a bit more advanced, and this robot for example, has up to six $J$ matrices for almost every possible $X$! Take the example above. Let's find a second $J$ associated with the $X$ above.

A configuration such as this: 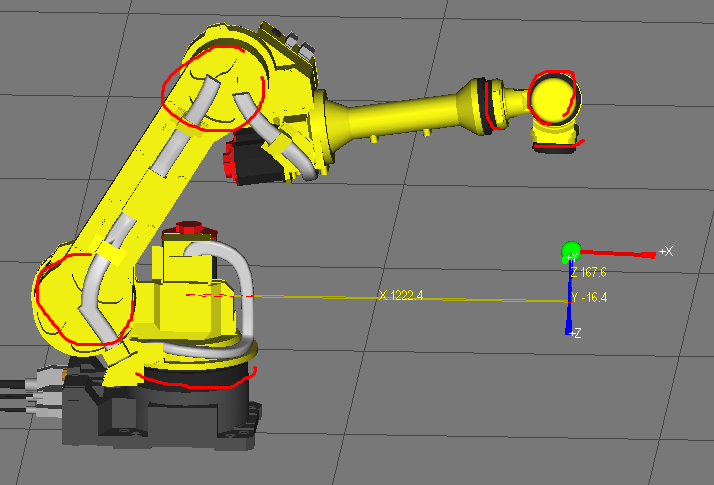 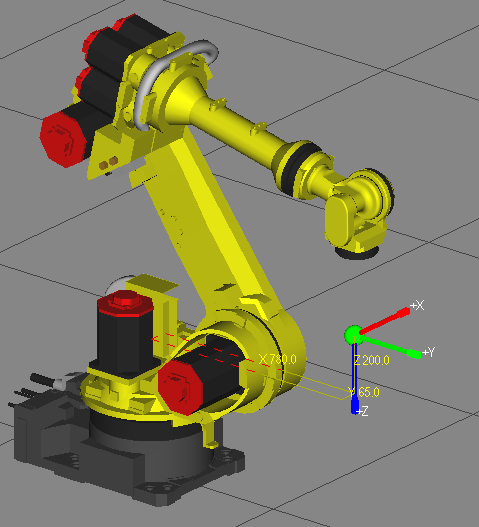 Spot the difference yet!? The J4 axis has rotated 180 degrees! Thus the new $J$ and the old $J$ AND the alternative $J$ ALL correspond to the same $X$!

8
Resampling attitude states (quaternions, rotation matrix) in a Particle Filter
3
How do I go about implementing a Kalman Filter for a pose estimation algorithm?
3
Choosing the state vector for an EKF
2
Yaw from accelerometer? No! So what do these equations actually mean?
2
What is an axial and polar vector?
3
What is the difference between a Bayes Net and a Factor Graph
0
How to go about programming Robot Arm with 3D point