Is the information on the following link logical?

I am trying to learn IMU's, accelerometers, gyros etc. for a while.

So I came across with this answer below,

From the accelerator sensor data, you can only calculate pitch and roll. The bellow document from Freescale explains with plenty of information what you need:

Based on the sayings of the document,

Of course, the result is this only when the rotations are occurring on a specific order (Rxyz):

Depending on the rotations order, you get different equations. For the $R_{xyz}$ rotation order, you can not find the angle $\psi$ for the Yaw around z-axis.

But I don't see how the order of turn motions matters in case of getting pitch & roll from accelerometer data. Without the histoy of orders, the accelerometer will give specific outputs at specific orientations.

So what I am actually asking is whether the answer I shared is logical or not. Could you please clear the situation for me?

Without the histoy of orders, the accelerometer will give specific outputs at specific orientations.

Correct, but you might define a specific orientation ambiguously, and if you are ambiguous about it then you need to clarify.

Now, keep the rotations the same, but change the order:

Now, if you had an IMU/accelerometer in your hand, it would clearly give different readings for those two results, but that's because they're two different orientations. You can't just say it's 180 about this and 90 about that, you have to specify which rotation happens first if you want someone else to be able to understand.

The way I think about it is that the order of rotation is an extra parameter in the description of the orientation. An angle about each of three axes and then an ordering of those axes. Four things to track: x, y, z, and the order in which they're applied.

If you want to guarantee you're getting a pose right without having to worry about whether you're using the right formula, you may want to consider quaternions. They also happen to have four parameters, but they're not in any kind of sensible units. You can imagine what a 45 degree rotation about an x-axis looks like, but what does a quaternion look like?

The Answer is logical simply because its a mathematical statement that explains how calculate Euler angles..from accel measurements...it also explains one of the caveats of using said system. Namely what was suggested in the comments 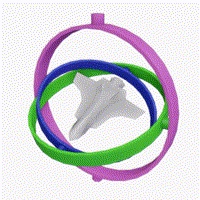 From the wiki animation one can see that the system can get stuck if rotated in a specific way causing them system to lock up and entire angles being completely gone.

This is one of the reasons Quaternions Are used as a way to measure angle as the dont suffer from the same issue as Euler angles, but are however difficult to visualize.

Quaternions find uses in both pure and applied mathematics, in particular for calculations involving three-dimensional rotations such as in three-dimensional computer graphics, computer vision, and crystallographic texture analysis.5 In practical applications, they can be used alongside other methods, such as Euler angles and rotation matrices, or as an alternative to them, depending on the application.

However, accels...are generally...useless by themselves if you want to calculate a real angle. As such one generally fuses them with gyros and sometimes magnometers or other sensors to get a more stable and real measurement.

Not the answer you're looking for? Browse other questions tagged imu accelerometer or ask your own question.