I want to actuate a motor based on a wav file, but it has too many samples per second

I am trying to actuate a simple DC motor based on a wav file. At the moment I am using the "cat vs dogs sounds" from Kaggle.

One of the wav files in this DB looks like this: 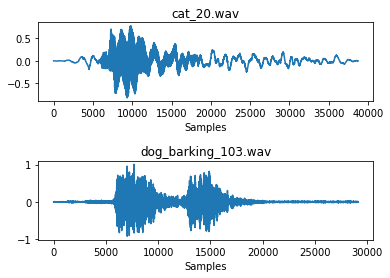 These audio files are just a few seconds. The sample rate is 16KHz.

My first idea was to just actuate the motor based on the amplitude, but at 16KHz this doesn't make any sense. Also, the signal goes constantly from + to - (this is sort of ok because the motor can move in both directions), but from a human POV, what the motor does doesnt make any sense, because the movements are too rapid. I then tried to "decimate" the signal into a few points per second, but the signals seem to be badly destroyed.

DC motors are actuated using an Adafruit board, using Arduino, and then I have a Python script that interfaces with the Arduino through serial. I have this working fine, and I can make for example a loop from python that increases the speed every few seconds. My idea was to go forward or backwards based on the amplitude of the signal (if it is negative or positive), I am no expert on audio, so this might make no sense. I won't react to other sounds, only to the input wav files.

I don't really know what is the best way of transforming an audio signal of 16KHz into something that can be use to actuate a motor. At the moment I am using a DC motor, but the idea in the near future is to use leds instead, and change their intensity based on the audio signals

You want to feed a lot of data to a slow consumer. Of course, you need to adapt somehow the two ends. I see the following options.

You need to low-pass filter the input data.

Not the answer you're looking for? Browse other questions tagged motor python digital-audio or ask your own question.