What is the difference between the pose of a robot and the configuration of a robot?

Do "configuration" and "pose" means the same thing? If not what is the difference?

Do "configuration" and "pose" means the same thing?

One of the most clear definitions of 'pose' that I've heard is in Peter Corke's Robotics, Vision and Control (RVC). It states that:

The following figure is figure 2.2 in RVC: 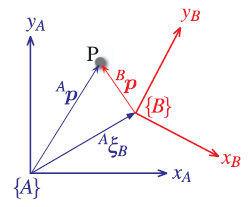 The 'configuration' of a robot is a set of scalar parameters that specify the positions of all of the robot's points relative to some fixed coordinate system. This can be expressed as a vector of positions and orientations, for example:

If we consider the two-link planar manipulator with 2 revolute joints (2R-arm), shown here (taken from fig 7.3 in RVC): 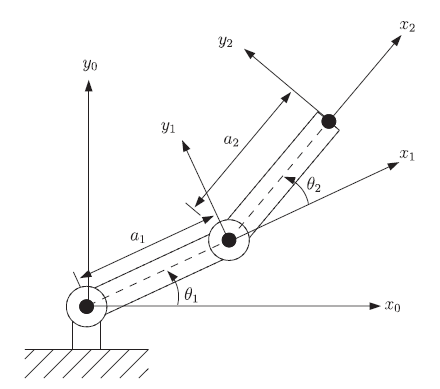 Note that configurations are not necessarily unique. For this robot, there are two possible configurations that result in the same end-effector position, but the end effector will have a different orientation in each case.

A worked example using MATLAB can be found in the Analyzing a 2-joint planar robot arm lesson on Peter's QUT Robot academy. This includes a visual description of the 2R-arm shown above.

Not the answer you're looking for? Browse other questions tagged mobile-robot wheeled-robot manipulator or ask your own question.