Dropping a box from a quadcopter

I am trying to estimate when and where to release a box carried by a delivery UAV such that it falls on a given target. I need to take the wind speed/direction into account. (See the visual below for reference.)

Through the pose estimator, I have access to the position and velocity of the UAV in $X,Y,Z$ axes, so as the position of the target. The box needs to be released from approximately 2.5m. Also, there is a wind speed/direction sensor located by the target location, in average the wind speed is around 6mph in the test area.

Note that the grabber that releases the box has a latency of 3.5s.

There are a number of examples online that solve this problem using SUVAT equation in two dimensions without taking the wind into account. But I couldn't find any information regarding a robot operating in three dimensions. 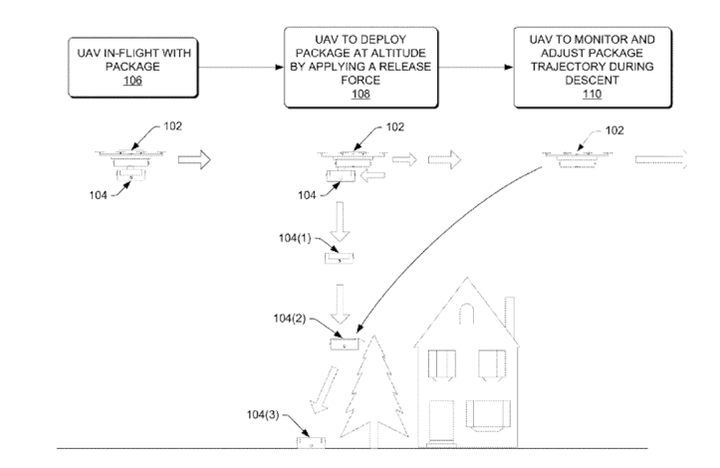 At a height of 2.5 meter, wind is negligible. Once the wind factor start to affect your precision, it is to windy to fly safely.

If the UAV has to move, you will have to fly the UAV over the target and use the basic equations for a falling body.

If you can 'park' your drone above the target location, you will be as precise as your GPS can be. From experience, this option is best, and with good component, you could get it within 30 cm.

And you can read what other university has done for dropping 8oz water bottle from a minimum height of 90 meter here (last year competition) and get inspire.

Throwing an object from a moving UAV quadcopter isn't the easiest control problem to start in robotics. The reason is, that the system has a non-linear characteristics which means that the equations of motions have to do with ordinary differential equations. The box dropping problem is way more complicated than the famous three body problem which was researched by Isaac Newton in the 17th century. Newton was a professor at the Trinity college in Cambridge, which is one of the most prestigious Universities in the world.

This background information is important to understand which kind of theories are needed here. It has to be technology which is more advanced, that what Isaac Newton was using, because he struggles with the three body problem. The good news is, that such technology is available since the 20th century, it's called model predictive control. The first thing to do is to create the forward model of the problem. That means, a physics simulation has to be created which is calculating the position of the box under the influence of the wind parameter and the own speed of the UAV. Basically this task is equal to program a small game in which a graphics subsystem shows on the screen the movement.

The second subproblem is to use the forward model in the opposite direction. This is called predictive control. The controller gets as input the goal position of the box, and then he calculates the needed actions of the UAV to reach the state. In the literature, the concept is known as Receding Horizon Control. It contains of a prediction step, the result is stored in a graph and then a solver is searching in the graph for a goal node which fulfills the constraints. The edges on the graph are the action commands for controlling the UAV.