Walking on the spot before moving

my question revolves around 4 limbs robot ( but maybe even 2 limbs ) walking. As i see in many videos robots start "walking on the spot" in order to balance before actually moving somewhere. Why is that ? Has someone managed to start walking immediately skipping the "walking on the spot" phase?

Thanks in advance for the time spent answering this!

EDIT: Just to clarify, this is the behaviour that i'm talking about

The behavior of going on the spot is the consequence of a hierarchical control system. The motion controller on the lower level can balance the robot, while the controller on the task level is able to execute a longer trajectory. The programming of such hierarchical control architecture is done independent from each other. The biped robot is in reality a combination of a car-like motion model which can drive forward and backward plus a walking controller which is able to maintain the center of gravity.

It is surprisingly easy to overcome this phenomena. All what the programmer has to do is to modify the animation script. If the high-level planner has a goal from the beginning at timecode 0, the robot will not wait but it will move as fast as possible into the direction. The robots behavior at a certain point in time are determined by the script, very similar to animating a virtual human.

An animation script is a notation for writing down a time-schedule. It defines, at which point in time the robot is doing which action. It can be visualized as a gantt-chart in which behaviors can overlapping at the same time. 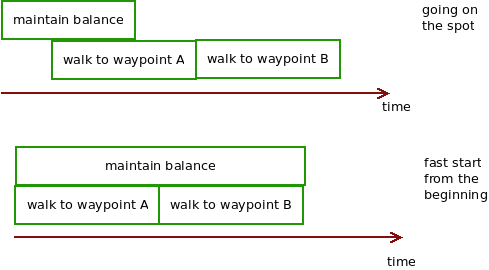 Not the answer you're looking for? Browse other questions tagged balance walking-robot or ask your own question.

7
Learning Algorithms for Walking Quadruped
1
Where should I put the angle sensor on my cart-pole robot?
3
Do walking robots use accelerometers?
7
Optimal location of the center of mass for an inverted pendulum
4
Angular momentum of rimless wheel in Passive Dynamic Walking
0
Why do I need an additional moment of inertia term in the cart-pole dynamics equation?
1
How do the joint angles of a 4-legged impact the body's position with respect to the world frame?
0
How to derive the Jacobian for a floating base linkage?