Why is the endeffector of a delta-robot on the slant?

A delta-robot is a nice design for a robot, because it allows to separate the motor from the moving parts. As a result, large and heavy motors with 800 Watt can be used and at the same time the construction remains lightweight and the robot can move very fast. Instead of building a delta robot in real hardware, a first prototype was created in Box2d which is a physics engine to simulate diverse robotics types in realtime.

The joints in the middle can move freely, only the links ontop have a builtin servo motor. But something is wrong with the parallel kinematics. If the endeffector is moved away from the middle to the left, the angle is no longer 90 degree, but the endeffector gets a little bit diagonal. This makes it hard to grasp an object. Has this effect a name, and can it be fixed with improvements in the parallel kinematics? 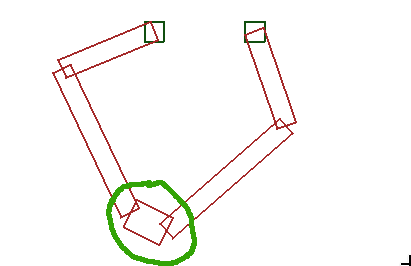 In other words the translation motion of the platoform is not an independent, pure translation motion, it is coupled to the rotation. Parallel kinematics are not the only ones affected by this, a simple 2 degrees of robot behaves the same way, suffers from the same problem.

As for ways around this, you can add a 3rd degree of freedom and make an actual delta robot (your model is commonly called a 5 bar linkage, it is not a delta robot). More about the delta robot here. One interesting trait of the delta robot is pure translations, decoupled from rotation.

Another popular way around it is adding mechanismsm with additional geometrical constraints to make sure the orientation is correct, like a paletizing robot, e.g. this. But this is more for serial kinematic chains.

11
What are the advantages of using the Denavit-Hartenberg representation?
4
How to make one robot follow the other in parallel formation
6
One of the best ways to numerically integrate the velocity?
1
Why I'm getting very long terms in the inertia matrix (or dynamics model) of the robot using matlab script?
9
Why do we generally prefer DH parameters over other kinematic representations of robot arms?
3
Determining the graspable range of a robot arm
0
Is there any robot stability control equation that describes the relation between velocity of the robot and its orientation?
0
I found the matrices but can't find the inverse kinematics angles
2
Understanding the Robot Jacobian