Does the red object act as a fulcrum (as explained bellow) to make picking up easier?

In picture one I have shown a robot arm (green) rotating to pick up a box, using a fulcrum (red). The arm after rotating is shown with black rectangle. The vertical arm on the left is attached to the horizontal green arm and goes down to make the green arm rotate.

In picture two, I have shown a robot arm which goes up and down to pick up the box, connected to a Revolute shoulder on the left which is not shown in the picture.

I have tried to modify the second picture, so I have created the first picture. I wanted to use fulcrum and related physics theorems to make the picking up easier for the robot.

Can you please tell me if I am making mistake and this is not a way to modify the arm and to make picking up easier? Does the red object act as a fulcrum? 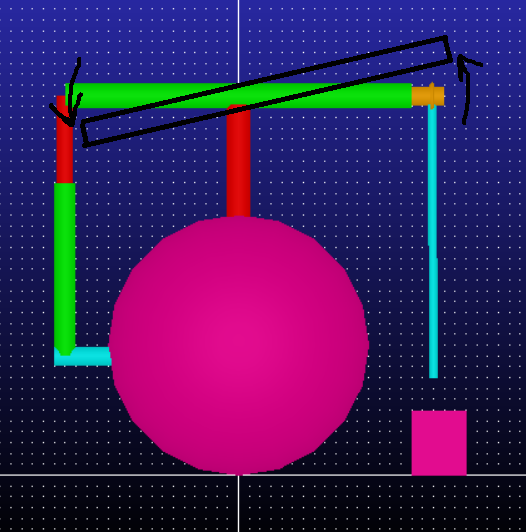 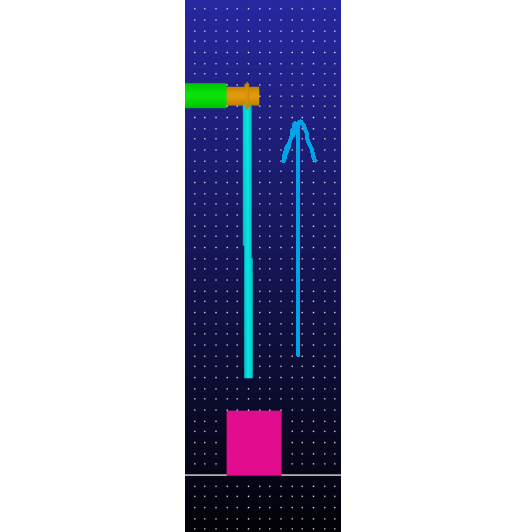 The red object looks like a fulcrum in that it provides the pivot point for the green bar.

However, the point of a lever + fulcrum set is to generate a mechanical advantage. Mechanical advantage is essentially "trading" a displacement for a force. If the output of the lever moves half as far as the input when rotated then it generates twice the force/torque.

In your diagram, it looks like the middle of the green bar is on your fulcrum, though, so it's basically the same motion on either end, which means you're looking at a 1:1 force difference.

That is, you're not getting any more force out of your lever than you're putting in. This might be advantageous if you can only orient your actuator in a particular way, but otherwise this doesn't seem to be doing much for you. You'd want more of the green bar on the actuator side and less above the load to get a force advantage.

2
How does one calculate the angular motion of each node in a robotic arm
1
What is the actual application for manufactuing, with robot arm autonomous object classification system
5
Is this a singularity or incorrect implementation of inverse kinematics?
0
Robot Arm Simulation
1
Why does the Denavit-Hartenberg representation fail to capture the length of the last link in my model?
3
Calculation of error, based on camera images
0
What is the most accurate method to calculate Torque of 5 DOF Robotic arm