let's say the robot Looks like this (an usual robot arm with 4 wheels) : 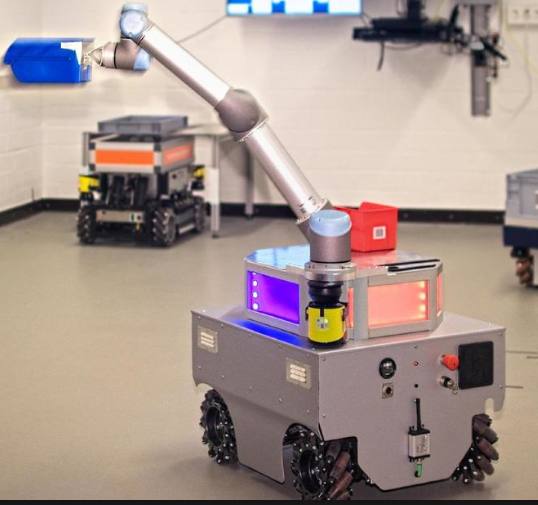 But the Question is how to set this x_goal. If the robot doesnt have an arm, then x_goal is equal to the position that the robot has to be there. But since the robot has an arm, x_goal must takes account the reachability and singularity of the arm.

What would be the most common/efficient way to estimate this x_goal in this case?

Pathplanning for a wheeled robot consists of transferring domain specific knowledge into the software. Requirements like determine the xgoal position and take care of reachability of the robotarm are usually not given as a machine readable description but as expert knowledge of how to manual control the robot with a joystick. What the system engineer has to do is to convert weak defined knowledge into a pathplanner which gets executed autonomously. One option in doing so is a fuzzy control system. In contrast to the famous myth, these systems can be used in complex domains, for example pathplanning.

Quote: “This paper treats the autonomous navigation problem of robotic systems in a dynamic and uncertain environment. [...] The fuzzy logic is certainly one of the most adopted approaches in industry.“

Before the pathplanner can be realized with fuzzy-rules and linguistic variables, the requirements have to be written down in natural language. This is part of the software engineering process and is done in expert-interviews. That are humans, how have controlled the robot platform in the past with a joystick and are able to explain which details are important for reaching a position.

Not the answer you're looking for? Browse other questions tagged mobile-robot robotic-arm wheeled-robot motion-planning path-planning or ask your own question.