In the paper "State Estimation for Legged Robots - Consistent Fusion of Leg Kinematics and IMU", the authors describe the application of an extended kalman filter to estimate states of a quadruped robot, where the equations used in the prediction phase of the kalman filter were equations 30 to 37: 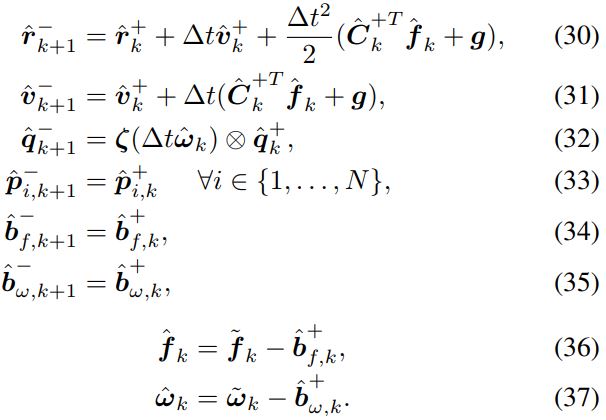 Where $(r,v,q,p_1..p_n,b_f,b_w)$ represent the states: position of the main body, velocity, quaternion of rotation from the inertial coordinate frame to the body coordinate frame, the absolute positions of the $N$ foot contact points, accelerometer bias and gyroscope bias respectively. in addition, $C_k$, $g$, $f_k$ and $w_k$ represent: the rotation matrix corresponding to quaternion orientation, the gravity vector, the measured quantities of the accelerometer and gyroscope respectively.

In addition, the authors introduce some auxiliary equations such as mappings and series, such as equation 13 which is a mapping of a rotation error vector in a quaternion, there is also the equation 20 where it is used to map the angular velocity in a matrix 4x4, and there are also equations 28 and 29 that are introduced to aid in the process of linearization and discretization of the models.

My first doubt is, what does this symbol below, used in the matrix $F_k$?

My second doubt is, the symbol $\omega^\times$ represents a skew-symmetric matrix of angular velocity, the resulting matrix of mapping 20 is a skew-symmetric matrix, I would like to know if the matrix $\omega^\times$ used in equations 28 and 29 is the matrix resulting from mapping the angular velocity in a 4x4 matrix (equation 20)?

My third doubt is, how to apply equation 28-29? as it is a series of powers ranging from 0 to infinity. Do I need to truncate it?

Not the answer you're looking for? Browse other questions tagged ekf or ask your own question.