Is it possible for a CC-turn trajectory to not touch the inner circle?

I'm currently struggling with understanding how a continuous-curve path can be constructed in a specific context: A vehicle is supposed to do an 180 degree turn at the end of an agricultural field. Since the minimum turning radius is usually high, the so called omega-turn can be applied. An omega turn is an LRL/RLR-turn as described by Dubins.

As far as I understand it, the usual approach to compute a CC-turn is to calculate the first segment, the clothoid, based on the vehicle constraints, so that at the end of the clothoid the vehicle is driving with maximal curvature. The intersections of the outer circle of a CC-turn with the trajectory path determine the start/end of segments. The inner circle's radius is equal to the minimal turning radius of the vehicle.

Now, the paper that I'm currently reading [1], that describes different turning maneuvers, shows a figure where the trajectory of the vehicle doesn't touch the inner circle of the CC-circles $\Omega_1$ and $\Omega_2$: 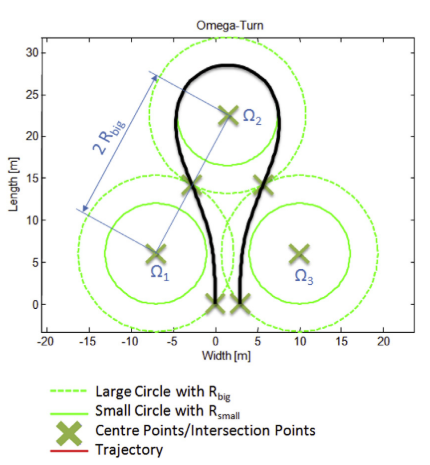 How is this possible with the CC-path algorithm? Or am I not understanding their approach correctly? The explanation of the omega-turn construction in their paper is as follows:

Edit: Additionally, some pages before, the general CC-turn construction is described like this:

The pre- liminary segment is a clothoid arc with maximum curvature change, also known as sharpness, $\sigma = +\sigma_{max}$. The curvature increases from $\kappa = 0$ to $\kappa=\kappa_{max}$.

How is this not a contradiction to the trajectory not touching the inner circle that has curvature $\kappa_{max}$?

Thanks for any help!

Apparently it is indeed possible for the trajectory between the clothoids to have a curvature of less than $\kappa_{max}$. For example, if the difference of state orientations $\delta = \theta_s - \theta_g \text{mod } 2\pi$ (called deflection) is very low, the path would be laid around the whole inner circle, causing an intersection with itself. To prevent this, an elementary path was introduced, which consists of two clothoids only with curvature less than $\kappa_{max}$.