Discontinuities in IMU data in pitch only

I am having a problem with pitch measurements with Bosch BNO055 IMU. The device is rotated on a relatively stable rotating spindle and does a revolution on a circle around 10cm radius. It is upright in the current placement. Attached is my signal when I do harmonic oscillations on an arc of around 90 degrees. 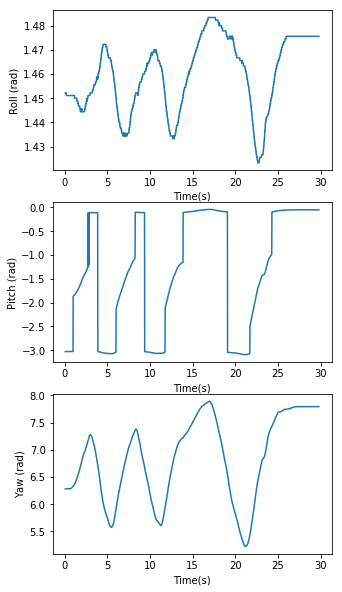 The estimates I am getting are from the internal Kalman filter. We are using the sensor with RTIMULib and this test code:https://github.com/RPi-Distro/RTIMULib/blob/master/Linux/python/tests/Fusion.py

As far as I know, no preparations were done, including calibration.

I get very unusual discontinuities in pitch that do not look like warping at all. There are quite a few phenomena, like:

Can this be caused by the problematic orientation? Can this be "expected" in any scenario?

Since the data is coming directly from the IMU itself, I would double check the startup parameters for the device and consider resetting it also. The datasheet gives information on selecting the style of fused data that is used (page 21), which is especially noteworthy as the data may be given as a relative orientation (relative to startup orientation) or absolute orientation (relative to the local/Earth magnetic field).

I would double check the initial configuration settings on the unit to be sure that what you think you're getting is what you're actually getting.

It looks like maybe you've got accelerometer data feeding into your angle estimate, which isn't necessarily bad, but I've seen some bad code out there for "converting" an accelerometer reading to an orientation. There are some solutions that work, but they're all based on this application note that gives "the absence of linear acceleration" as a precondition for using accelerometer output for estimating roll and pitch. If the sensor is traversing an arc then it is experiencing a linear acceleration.

Accelerometer output can't estimate yaw (heading) because the gravity axis is aligned with the yaw axis, so there is no projection of gravity to the yaw axis and thus there's nothing to measure.

Not the answer you're looking for? Browse other questions tagged imu or ask your own question.