I have to develop an algorithm using reactive paradigm and potential fields to avoid an obstacle like this one: 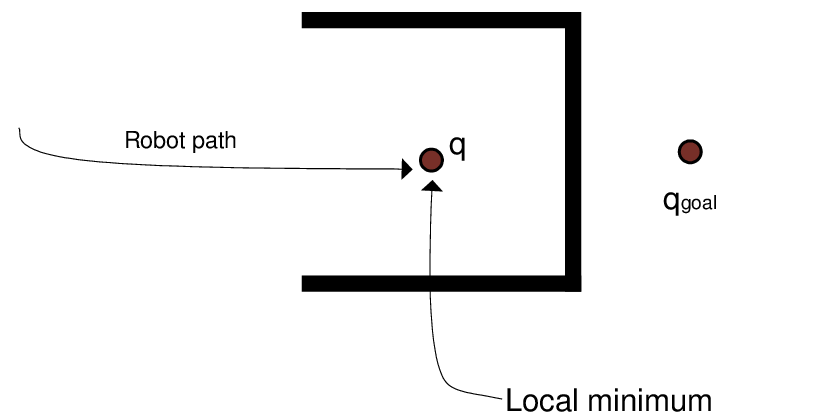 My robot can go inside the U, and it has to know how to go out. The problem is that between robot's position and its goal there is a u-shaped obstacle, with the U pointing to the robot. The robot has to move to its goal, but it can fall inside the U-shaped obstacle.

Any idea about how can I do it?

Solving this miracle can be done with a combination of a story graph, interactive execution of high-level commands and a planner. At first, the robot needs a control interface which accepts high-level commands, e.g. “go to south of u-shape”, “go to inside u-shape”. Then a random sequence of such motion primitives is generated until a valid plan is found.

In the figure the semantic enriched motion plan is shown. At first, the robot has go back to it's root position, the next subgoal is “south of the u-shape” and then the robot can go to the goal. For realizing such a planner a datastructure is needed which can be realized as a class. This datastructure contains the graph. It has fields like “parentid”, “name of motion primitive” and “costs”. Such a datastructure is similar to Probabilistic roadmap (PRM), but is enriched with domain knowledge. Here, domain knowledge is the natural language description for the motion primitives. 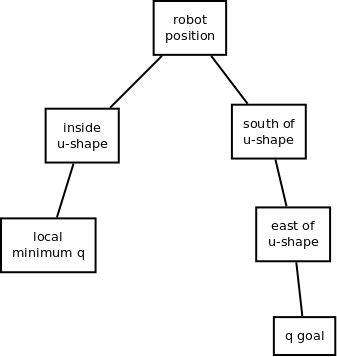 I was just reading a paper on this yesterday : here I am still in the process of understanding it properly. will update the answer soon.

PS: I don't have enough reputation to add comments yet that's why I answered directly.

3
How can we solve the problem of robot size in sensor based motion planning?
0
How often does a robot perform A* (A star) path planning in an unknown map?
2
how to find space in point cloud larger than given l*b
1
Potential field algorithm implementation
0
Compute vector of attraction plus repulsion forces in a 2D force field mapping
0
Construct Configuration-Space with Obstacles for arbitrary Object/Robot in Motion Planning
0
Collaboration of mobile robot and survaillance camera - classic localization (still) needed?
0
Path-following algorithm and suggestions for mecanum robot