How to tringulate many projections of a point to optimal postion?

Suppose we have many images for the same scene (with known poses already,using for ex: a GPS ), and the same feature appear in more than 2 images .

How to use all the available info to compute as precisely as possible the 3d-reconstruction of the scene? (actually ,I want a dense map but let's start with a point)

For 2 images , it's a least square problem solved with OpenCV function: cv2.tringulatePoints 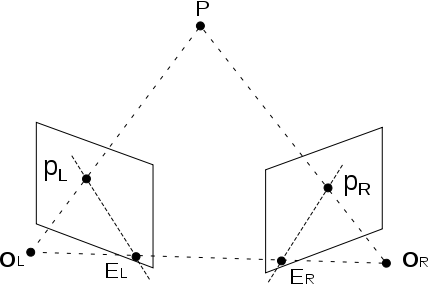 but for many, how to find the best estimate?

any ideas on the subject? [no problem with dense math]

I will assume, similar to OpenCV, that each camera is a pinhole camera, so you already corrected for things like lens distortion. In this case each visible point in 3D space $(x,y,z)$ gets projected into camera coordinates using

where $\mathcal{I}$ is the set of all indices of the cameras which see the considered point. You could also add weights to each quadratic term in the summation, for example to reduce the influence of bad or low resolution cameras. The error terms in the summation are also known as the reprojection errors.

I suspect that this problem is not convex, mainly due to the division by $\hat{z}'_i$. However I do suspect that if you would use an initial guess that is well within the viewing frustum of each camera that it would converge to the global minimum in most cases. This optimization problem can be solved with methods like gradient decent or Newton's method where the gradient can be calculated with

In a similar way the hessian can be calculated as well, but its expression gets a bit long and does not add that much to this answer.

A non-iterative way would be linear least squares triangulation. This method searches for the depth of the point of each camera ($z'_i$) and the 3D position at the same time. Namely, when ignoring disturbances in the pixels coordinates of the point, the set of all 3D points which would get projected to the same pixel coordinates would span a line. This line would go through the cameras position and the actual 3D position. By rewriting the first equations, then for each camera the following equation can be formulated

where $n$ is the number of cameras (so $\mathcal{I} = \{1,2,\cdots,n\}$) and has the least squares solution for $\vec{x}$ given by $(A^\top\,A)^{-1}\,A^\top\,b$. The inverse of $A^\top\,A$ should exist when using two or more (unique) cameras, so you should always be able to find a solution. The downside of this approach would be that it does not take into consideration the uncertainty of the direction of the line which get amplified more the larger $z_i'$ is and it would require more memory, especially for a large number of cameras.

Not the answer you're looking for? Browse other questions tagged computer-vision opencv 3d-reconstruction monocular 3d-model or ask your own question.