How to deal with sonar crosstalk

Our robot has a circular array of 12 sonar sensors that looks like this: 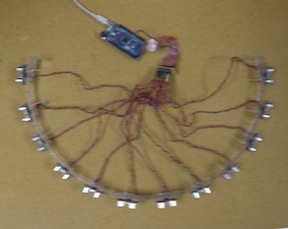 The sonar sensors themselves are pretty good. We use a low-pass filter to deal with noise, and the readings seem pretty accurate. However, when the robot comes across a flat surface like a wall, something weird happens. The sonars don't show readings that would indicate a wall, instead, it appears like a curved surface.

The plot below was made when the robot was facing a wall. See the curve in the blue lines, as compared to the straight red line. The red line was produced by using a camera to detect the wall, where the blue lines show filtered sonar readings. 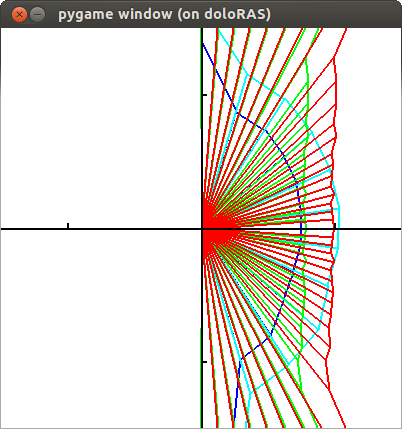 We believe this error is due to crosstalk, where one sonar sensor's pulse bounces off the wall at an angle and is received by another sensor. This is a systematic error, so we can't really deal with it like we would with noise. Are there any solutions out there to correct for it?

This is a common problem, and one of a great many. Acoustic sensing is a complicated field of study, a significant part of which is spent guessing what path a sound wave took between sending it and receiving it. As you've noticed, assuming that it went straight out and came straight back will produce odd results in practice.

To really solve it, you'll need to use a system that places a unique frequency and/or tone length on each sensor. This can be taken to significant extremes, e.g. Frequency-Hopping Pseudo-Random Pulse Width Modulation to Eliminate Crosstalk of Sonar Sensors in Mobile Robots.

There is also a low-tech solution, which is fairly straightforward in concept. If you wanted to simply detect the crosstalk, it would be a matter of firing a single sensor's pulse in between the firing of all sensors' pulses. If you detect the return pulse with any other sensor, you know that you are in a crosstalk situation.

In practice, this is fairly wasteful: notice that this effectively halves the number of samples you can take. So you can improve on the implementation by dividing the sensors into groups where each member of the group is far enough from the others that it will not receive crosstalk. The most robust version of this approach is to make the groups themselves be pseudorandom which not only allows the errors to average out over time but aids the detection of crosstalk on an individual sensor basis.

In your particular case, you have the added benefit of a camera sensor that you've shown is returning a more correct value for the ranges. Strategies to combine separate (and possibly conflicting) measurements into a single more accurate estimate is its own very broad topic (called fusion, example 1, example 2), but a very relevant one to what you're doing here.

Some sensors, such as the Maxbotix MB1200 XL-MaxSonar-EZ0, have a daisy chaining system built in where one sensor triggers the next sensor once it has finished its measurement. This way you can have N sensors and ensure that only one is firing at once but that there the next sensor fires as soon as the first has collected its return. This solution is simple but obviously greatly reduces the amount of data you get per unit time. Ian's solutions are far closer to optimal.

Is it possible to use multiple ultrasonic sensors on a single robot? Yes: "Using Multiple Sonar Sensors".

As you have already figured out, one sensor often receives echoes of pings sent by another sensor. There are several ways to deal with cross-sensitivity, roughly in order of simplest first:

P.S.: Have you seen "Infrared vs. Ultrasonic — What You Should Know" ?

(Yes, I've said this all before, at "Multiple Ultrasonic Rangefinder Question".)

8
How can I manipulate real-time sonar data from my Arducopter in Arduino?
3
Usage of Multibeam 2D Imaging Sonar for AUVs, testing them in the pool environment
6
Image retrieval through a multibeam imaging sonar
1
problem with simulated sensor in Matlab?
1
What's the difference between a sonar and ultrasonic sensor?
2
Convert sonar scans to Lidar scan file