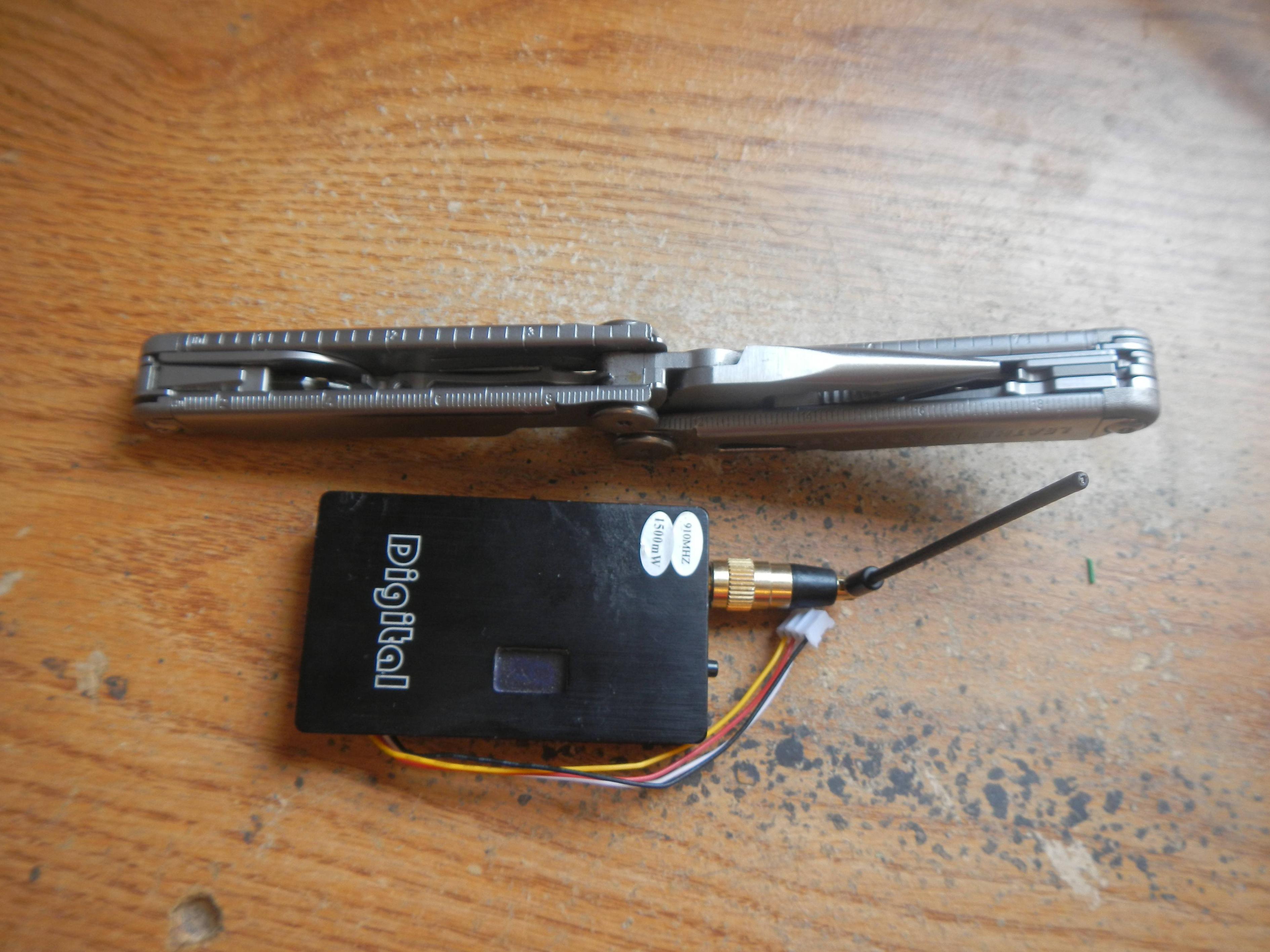 When the video transmitter is powered up, my control range drops from about 1.5km to under 50m. I'm surprised that the 910 MHz video channel affects my 2.4 GHz control channel this way.

Is this sort of interference expected? Is it because my transmitter is low quality? What changes are recommended — should I switch to a UHF control radio? Or a different frequency (eg 5.8 GHz?) for the video radio? Or just try moving it a few more inches (they are already about 5in apart)?

There's a lot of things that this could be.

The transmitter could be faulty, and transmitting considerable power close enough to 2.4GHz to be directly interfering with the receiver. Yes, the receiver is spread-spectrum, but interference to such a receiver will generally raise its noise floor, which will reduce its range.

The receiver could be faulty; it's front end could be getting swamped by the 910MHz. This would reduce the effective gain of the receiver front end, which would also result in low range.

There's even a slight chance that the problem is neither one, but some other bit of electronics: the 910MHz signal could be getting rectified by some component in a servo or other bit of electronics. This would generate signal at 1.82GHz, 2.73GHz and more -- that 2.73GHz signal, if it's strong enough, could cause issues with your 2.4GHz receiver.

In an ideal world both the receiver and the video transmitters would be inside of metal boxes, with bandpass filters right at the point of entry or exit for the RF signal that only let the correct frequencies through. Those metal boxes would weigh nothing, of course.

Alas, this is the real world. I'm not sure if it'd be worthwhile to try the metal box idea -- the required filters are hard to debug without a spectrum analyzer; you can put one together and see if it works, but if it doesn't you still won't know for sure if a filter isn't the answer, or if that particular filter didn't do the job for you.

The (US) Amateur Radio Relay League has a book called the "Radio Interference Handbook". The book is aimed at amateur radio operators who are having problems with their neighbors -- but much of what it'll have to say should be pertinent to your case.

I can say positively that 900Mhz china video transmitters can affect 2.4Ghz frequency range. I experienced this first hand and confirmed interference on my spectrum analyzer, it can cause harmonics on the 2.4Ghz but when the tx and rx are close it appears to have an affect on the noise floor too, using those low pass filter don't seem to help close range either.

I hesitated to provide this answer, because I can't find directly relevant articles to back it up.

It's possible that the video transmitter (even though it's on a separate frequency) is saturating the receiver for the controls. If this is the case, you'll have to find some way to reduce this. There are a few possibilites:

In any of these cases, you'll be better off if you can directly measure the interference signal instead of relying on the audible beeps to gauge the signal level.

0
why we need both vel and acc contribution for actual position?
0
Will a 2.4ghz controller work with a 5.8ghz video transmitter?
1
How to attach flysky receiver to racerstar all in one esc and flight controller?