I am wiring up a kids ride-on toy (Powerwheels) to control both speed and steering with an Arduino. The ultimate goal is to have the Arduino take analog inputs from the driver (steering and acceleration) as well as digital inputs from a Radio Control source. The Arduino will combine these inputs such that the Radio inputs override the driver, but otherwise the driver is free to operate the vehicle.

The vehicle is driven by 2 motors, Fisher Price part 00968-9015. From what I can find on the internet they are 12v DC brushed motors that run @ 1.25amps with no load, and supposedly hit 70 amps during stall.

I plan to drive the motors with the Actobotics Dual Motor Controller in split mode. Channel 1 will operate Steering with a 4" Stroke 25 lb Thrust Heavy Duty Linear Actuator from #ServoCity. Channel 2 would operate the above mentioned set of Fisher Price motors.

I have 2 SLA batteries that are connected in parallel for longer run time while maintaining a 12v output. The positive(+) terminal goes through a 30Amp DC circuit breaker before going to the rest of the system.

I'm a software engineer so programming the Arduino isn't a concern, but the I have to admit I'm out of my comfort zone with wiring and electronics. I could use any input on the wiring of this project. If I'm wiring something wrong, or should be using other/different components - suggestions are welcome!

Question 1: Can I run two 12v motors in parallel on channel 2 of the Actobotics Dual Motor Controller from #ServoCity? (can Channel 2 handle that load)

Question 2: Will the parallel 12v SLA batteries (as shown) be sufficient to run both motors, the Linear Actuator and an Arduino without any problem or is there a more appropriate power configuration? I would like to avoid making the worlds slowest Powerwheels car. 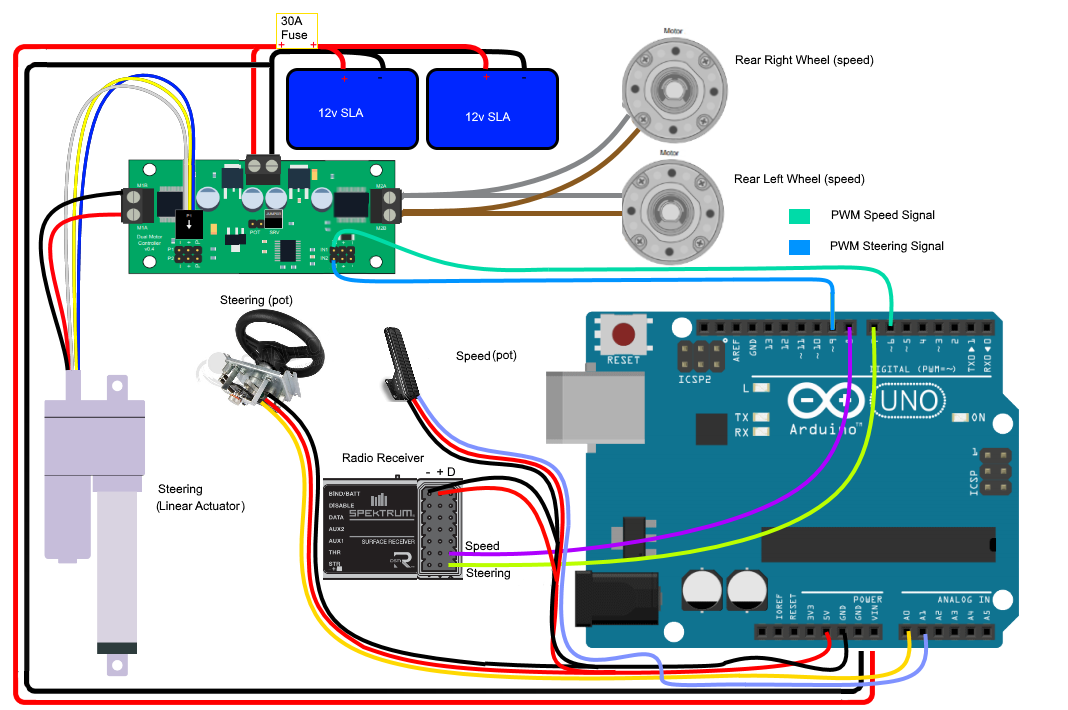 I suspect that you will need a more powerful motor controller. This one is a 10 amp controller, and I suspect that the motors will have a higher stall amperage than that.

The RoboClaw 2x30 amp motor controller is the minimum I'd use, and can be bought from the same place (I use ServoCity as well). I might go up to the 45 amp version. I build robots that are much lighter than this car (with kid) and i use the 45 amp version. But I often over-build so that my bot's don't set themselves on fire.

For steering I think I'd use a small electric motor like this one for the steering. I'd either use a belt that could slip or a 3d-printed gear that would break if there was too much resistance. Or I'd find the plans for a slip-clutch to make sure that the motor won't use more torque than X, where X is an experimentally determined value. I'd put the steering motor behind the dash panel so that the kids can't get their fingers caught in the belt or gear.