I am trying to understand the control of the quadrotor in 2 dimensions from the Penn course on aerial robotics. The attached image describes the linearization of the control efforts assuming that the quadrotor is near the hover position. Everything seems fine except Equation 7 to me. The control effort u1 makes sense as u1 = mg + mz¨c. The original equation z¨ = − g + u1*m is solved for u1, and z¨c (the actual z acceleration) is used.

Can anyone explain this to me? 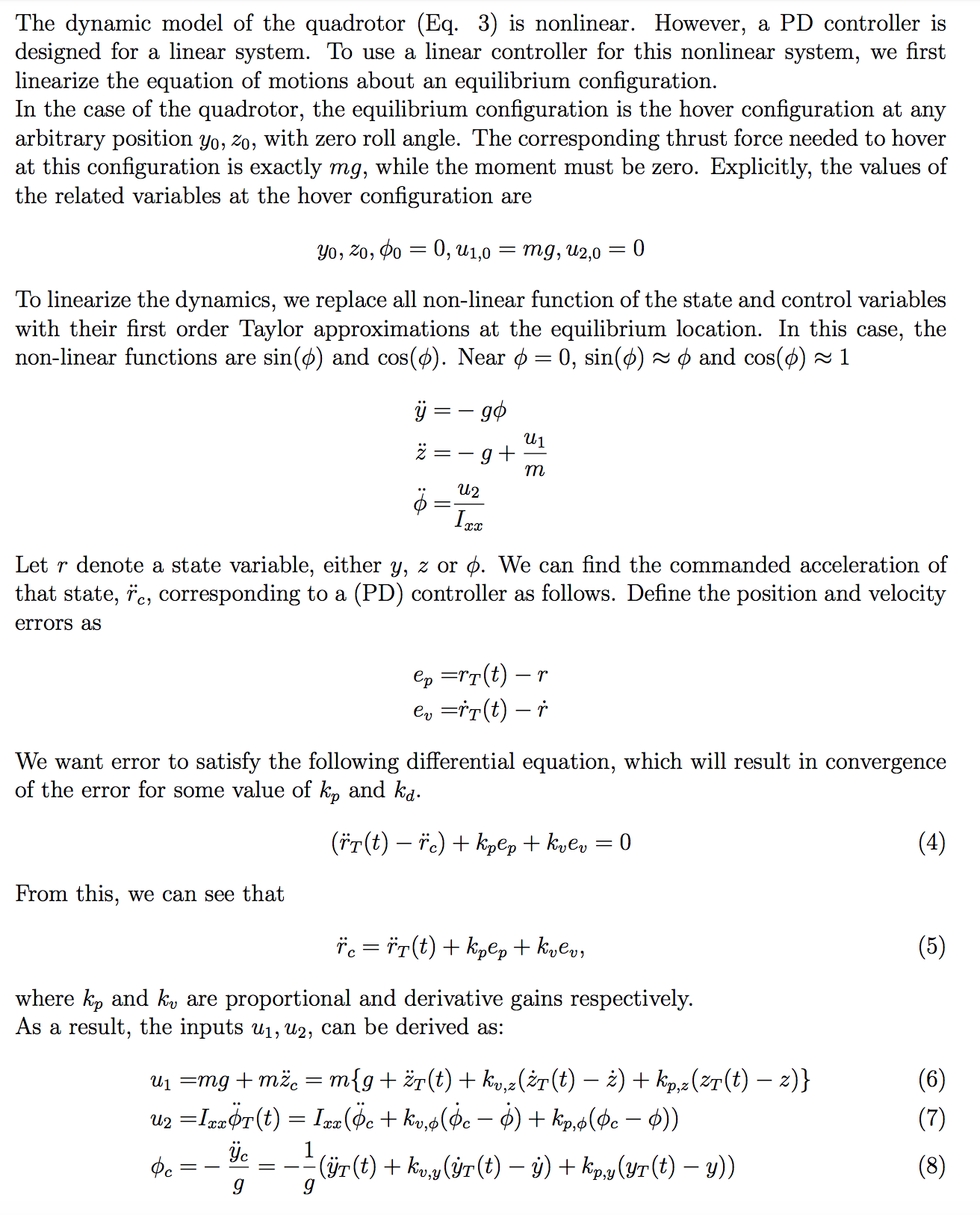 EDIT: For further clarity, let me try rephrasing this question.

and since our control effort is defined as:

In this case, when we took the Z part of the PD control effort, we replaced $\ddot{z}$ with the formula for $\ddot{z_c}$ (our control effort)

However, that is not what happens when solving for u2. We start off

Instead, we do this:

Remember, the $y$ position of the quadrotor depends on the angle $\phi$, therefore, in order to control $y$, we need to control $\phi$ in a way that yields the desired $y$. To control the angle $\phi$, we start from the original equation: $$ \ddot{\phi} = \frac{u_2}{I_{xx}} $$ Now the goal is to design a controller by which the angle is controlled. The PD-computed torque controller has this form:

Now plug $u_2$ inside the original function of the angle, hence

Notice that the term $I_{xx}$ is eliminated deliberately. The notion is trivial. Relying on the mathematical model, we can design a controller that compensates for linear or nonlinear terms (e.g. as the case with $I_{xx}$).

Not the answer you're looking for? Browse other questions tagged quadcopter control or ask your own question.

2
PD Algorithm for a Quadrotor [Simulation]
6
Position Controller for a Quadrotor
3
Understanding a sliding mode controller for quadrotors
1
Backstepping Integrator: changing the virtual control
7
how to implement and code inner and outer PD controllers for quadrotor for position tracking
1
position control for linear model of quadrotor (problem with tracking task)
4
How to implement PD controller to this 2D planar quadcopter dynamics?
3
Input/output linearization
2
How to obtain the state space representation of a computed torque control system?