I have a basic question. Imagine a plate, with a hole drilled in each corner. Imagine 4 shafts in these 4 holes,attached to another plate.

Intuition tells me that it would take considerable effort to have the design as such that the plate slides without getting stuck.

Let's now replace one of those shafts by a leadscrew. Designs exist where the leads crew would allow to smoothly upper and lower said plate.

My intuition, however, indicates that I could never get such a conceptually simple design to work. Even with plain bearings.

What are the conditions to get this right?

This is a great problem to hone mechanism design skills on.

There is a set of dimensions for which this mechanism works fine.

The condition for this is that the contact of each rod & hole, including the drive screw, remain on the correct side of the friction cone, for all free motion and bending of the elements.

A starting point for a basic model(equation) of this is to treat the contact between the rods and holes as flat surface contacts when estimating the friction, as well as assuming the hole edge loads do not start deforming material. You can resolve the external loads into normal contact forces and then compare the driving force (from your screw) to the friction force.

Below is a simple representation of the forces at one hole. 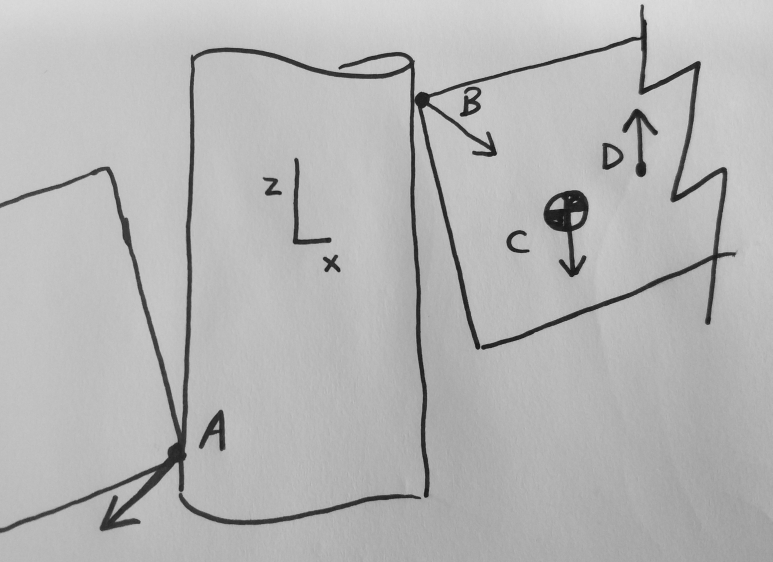 Force $D$ is the driving, actuation force at some distance away from the hole. Force $C$ is the gravitational (and if significant, inertial) force. Forces $A$ and $B$ are the reaction forces of the edge of the hole on the rod.

For our simplified model, the basic rigid body assumptions are used. Capitals are vectors and $\times$ is the cross product. $F$ are forces, $P$ are positions.

where $\alpha = 0$ since we are sliding and not rotating.

Forces $A$ and $B$ have two components. The normal forces needed to balance the moments, and the axial forces that are calculated using a basic friction model.

Solving the above equations for $a$ is, I believe, the most basic equation that will let you estimate things.

If you need to be more accurate, or aggressive in your design, then you need to worry about the bearing loads and where plastic deformation will start destroying your mechanism.

Not the answer you're looking for? Browse other questions tagged mechanism linear-bearing or ask your own question.