Hi i´m designing a robotic arm based on this idea of the NOVABOT I only want to change its structural parts by aluminum tubes. In this design 3D model it use the servo hs-311 wish have a max torque of 3.7 kg/cm, and its made of some plastic material.

I made my calculations following this url and made a excel that I append here... the mass of my design have been taken from iProperties of Autodesk Inventor, so they are in mass units not in weight. And I´m dismissing the mass of the joints (m5,m6) to have a first idea of the values, because I dont have the selected motors.

And my problems is that I think I´m missing something here because the it results in a very high torque motors, for this simple design. 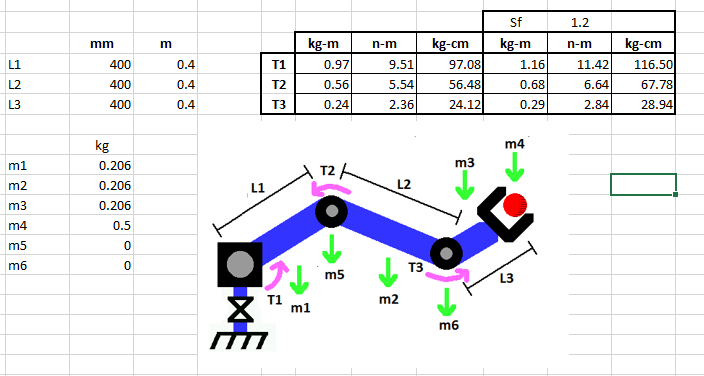 here is my excel

There are two general categories of servos, hobbyist and industrial. Hobbyist ones generally go up to about 50kg/cm, and some will do more than that but costs multiply (sometimes these are called giant scale). Industrial servos start at around $250 minimum (400+ is more common), not including all the additional hardware to control them. And they are considerably more complicated to use, as you would expect from industrial-grade motors.

If you need more power, geared stepper motors are a much cheaper option, but they don't have the same position-sensing functionality. You can buy rotary encoders separately (either incremental or absolute; absolute are more expensive but more useful) and those would solve that problem, but that is an extra component and thus increases complexity. Be advised that geared stepper motors are heavy, so you would only want to use them for the lowest DOF's. Some arm makers use steppers for the base rotation and both T1 and T2, but both joint motors are mounted to the base and one of them transmits power along a belt or driveshaft to T2. This allows the extra power without massively increasing the moving weight, and the belt or driveshaft gears can be used for additional gear reduction.

If you take this approach, consider that these geared steppers are also long, so if you mount them on opposite sides of the arm, that base will be very wide - probably wider than L1 is long.

And now you see why industrial robot arms are so expensive; it's hard to pack all the components into the right places and find pieces that are the exact right size. But you are definitely in the right direction by using only metric units!

Well it seems that length is your problem.I came here having a similar problem to yours with designing a robotic arm. Servos that can pull this weight go for 500+ USD. Adapt the length and weight of your joints to what your servos can lift. I would also suggest using 6V power supply to get more torque out of your servos and while datasheets are available for cheap servos from China you should not take the listed torque for granted.

Not the answer you're looking for? Browse other questions tagged robotic-arm servomotor torque or ask your own question.