Yaw from accelerometer? No! So what do these equations actually mean?

note: I'm just a day or so into the use of inertial measurements and trying to learn everything at once, this may be a noob question (it's my first here).

I have seen this image of "Figure 8" in several sites geekmomprojects, makerworkshop, husstechlabs, aros.se, but I don't understand it or how the equations are derived.

If I set an accelerometer on a table so that $a_x$ and $a_y$ are nulled and rotate it around the $\hat{z}$ axis, I'm changing the yaw of the accelerometer but of course there is no change in the value of $\theta$ away from zero as given by the last equation.

So how is this a measurement of yaw? Or am I missing something obvious? What do these three expression actually mean? I'm beginning to think that the first two expressions are simply the "tilt angles" and the third is some geometrical angle that is not actually independent of the other two. 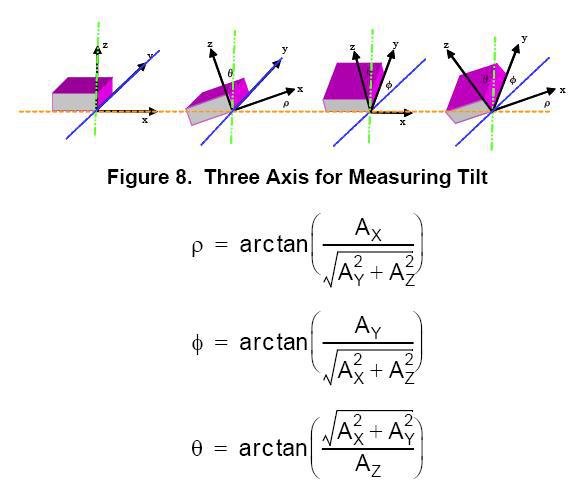 Basically, when the imu is sitting still is tells you which direction gravity points, but this is only 1 axis of a coordinate system so doesn't fully define your orientation. This is why systems will frequently add another measurement such as a magnometer which can generally be used to know which direction is north. With these two directions you can fully define the orientation.

Not the answer you're looking for? Browse other questions tagged imu accelerometer orientation or ask your own question.

6
How to estimate yaw angle from tri-axis accelerometer and gyroscope
7
What does “6 degrees of freedom” mean?
2
Instantaneous velocity calculation from accelerometer?
0
How to transform Accelerometer data from the robots frame to the world frame
9
Accelerometers in a self-balancing robot, can't we do better?
2
What is required to get the roll, pitch and yaw of an aerial vehicle?
2
Yaw from IMU acceleration