I'm reading Mechanics of Robotic Manipulation by Matthew T Mason and I stumbled upon the concept of kinematic constraints. The book mentioned about two types of constraints: holonomic and nonholonomic constraints

Following is one example of a holonomic constraint mentioned in the book: 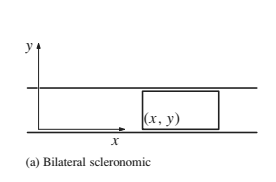 A rectangular block sliding in a channel with free variations in the coordinates x,y,and theta. The channel imposes a constraint so that the rectangle's y value is fixed. The holonomic constraint is described below:

While the following is an example of a nonholonomic constraint mentioned: 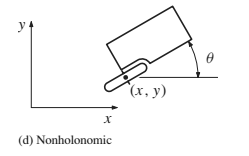 Suppose that we add a wheel to the block, so it behaves like a unicycle or an ice skate. At any given point in time, the block can move forward and backward, it can rotate about the wheel center, but it cannot move sideways. The nonholonomic constraint equation is described below as:

The author also wrote that:

All of the explanations so far seem to contradict my understanding of the physical meaning of robotic holonomic movement:

I hope someone can help to clarify my understanding.

You can look at degrees of freedom as if they were the number of variables that you need to use to describe your system. So, for a robot moving in a 2D plane, its state would be represented by: $$ s=\begin{bmatrix} x \\ y \\ \theta \\ \end{bmatrix} $$

For a robot moving in a 2D plane to be holonomic, it must have the ability to change any state variable at any given time, no matter the value that the other variables have at the moment.

So, for instance, this means that in order to be holonomic, the robot must be able to change its $Y$ variable to any value it wants without altering $X$ and $\theta$. In the example you give for a non-holonomic constraint, while it is possible for the robot to reach any $X$, $Y$ and $\theta$ values, it has a limit on the number of paths that it must take (one such impossible path would be to move sideways!).

Holonomic restrictions limit the number of DOFs. For instance, your wheeled robot cannot fly, hence $Z$ (height) does not belong in the state.

Non-holonomic restrictions limit the ability to change the derivative of the state at will, hence they reduce the number of DDOFs. For instance, you cannot have your unicycle rotating (constant $\dot{\theta}$) while only moving in the $X$ direction.

Interestingly enough, a lighthouse is holonomic! 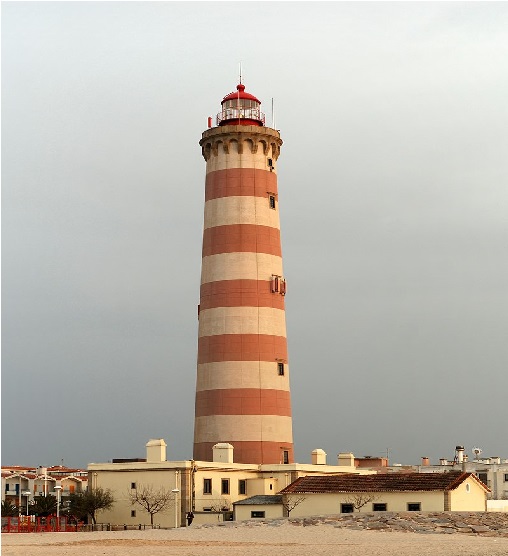 Everything that is stationary is holonomic because it has 0 DOFs and 0 DDOFs!

So, in a nutshell:

1) DOFs = number of variables in the state

2) DDOFs = velocities that can be changed independently

5) A robot is holonomic if, and only if, DOFs=DDOFs

Not the answer you're looking for? Browse other questions tagged kinematics wheeled-robot navigation or ask your own question.

11
Smooth servo movement for a crawling robot
1
is it possible to track movement on a tennis court?
5
2DOF arm with quick movement: Stepper, servo, or DC motor?
0
How can Denavit-Hartenberg representation with only 4 variables describe rototranslations with 6 DOF?
1
motion model for forward movement