I'm working on a self-balancing TWIP (Two-Wheel Inverted-Pendulum) robot project which will be using two brushed DC gearmotors with encoders. As there were no speed constraints for the robot (and given a wheel radius of 0.03m) I chose a top speed of 1 m/s for the robot, giving a rated speed requirement of 318.28RPM for the gearmotor.

From what I understand, a high enough RPM is required to prevent the motor speed from saturating while the robot is balancing, as this can prevent the robot from maintaining balance i.e. the wheels can’t keep up with the body of the robot, and it falls over.

But, an encoder allows for direct measurement and control of the motor's speed, which can prevent it saturating i.e. it can prevent the motor from approaching speeds it can’t handle.

So, will the RPM I’ve calculated be fast enough for the robot or, since I’m using motors with encoders, can any motor speed be used? 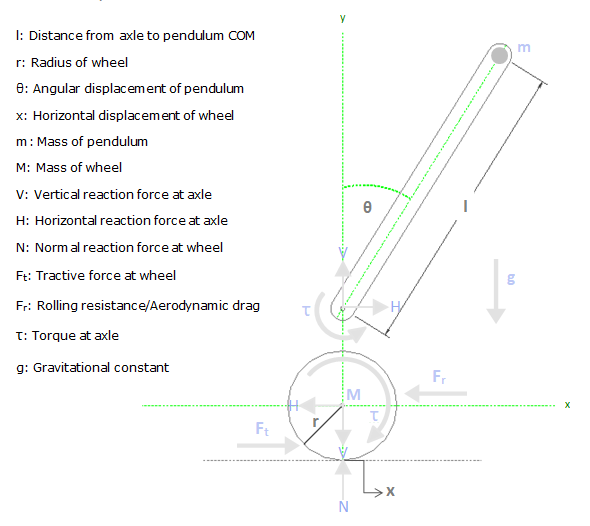 Let me put some numbers on this.

(It's equally valid for linear or angular positions/speeds). You would think that you need to accelerate from 90 to 0 degrees, but then you'd hit 0 with some velocity. In reality, you're looking to get to 45 degrees in a quarter second, then spend the other quarter second decelerating. So, if you want a quarter second to go from $\theta = 90^{\circ}$ to $\theta = 45^{\circ}$, then:

This is the acceleration you need beyond gravity to get the performance you want. You could accelerate slower if you want to - again, it's up to you to specify.

Now let's lower the speed requirement. Say instead of having the pendulum "pop" up from laying down in half a second, you're okay with it taking two seconds. Do the same steps as above, but now when it accelerates for half the time, it's accelerating for 1 second. It again decelerates for 1 second.

Seems reasonable so far, but you have to torque the pendulum by accelerating the base. Find the projection of the arm to the +y-axis, using the angle the arm makes with the vertical ($\theta$), to see how the base acceleration impacts the and then see that the base generates an angular acceleration at $\ddot{\theta} = \frac{1}{\ell} \cos(\theta) \ddot{x}$.

Now, at 90 degrees, $\cos(\theta) = 0$, so the angular acceleration you get is zero for any $\ddot{x}$. No amount of base acceleration will get the pendulum upright.

So my gut reaction earlier, that the slower acceleration would result in a higher top speed, was wrong. It can result in a longer distance traveled, but it looks like the top speed is lower.

But, I hope you can see that "popping up" from laying down is not realistic. You'd be better off to have some kind of spring-loaded trigger that pushed up instead of accelerating the base.

This still doesn't take into account the mass or moment of inertia; it's just looking at the base acceleration's relationship to a massless rod.