Thrust and Torque on Quad Rotor

I am a beginner on Drones. I would like to understand the how each motor contribute to thrust on the whole drone. And what is the direction of torque created on each propeller.

Everywhere I find a tutorials with complex formulas. It would be great to have a simple answer about how the thrust system works on Quad rotor and the torque mechanism of it.

It would be great to know how lowering the speed of one propeller causes the movement in certain direction, and also the relation of propeller motion with pitch, yaw and roll.

I think that the section https://en.wikipedia.org/wiki/Quadcopter#Flight_dynamics from wikipedia is quite simple, and neglects cumbersome aerodynamic effects that can arise for fast maneuvers. I will take a picture from there as it's open source. 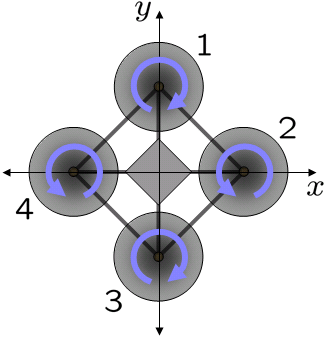 The propellers are numbered from 1 to 4, and assume that the center of mass of the quadrotor is at the origin of the frame. The propellers are each exerting force along the z-axis in body frame (pointing toward you) and the sum of the 4 thrusts gives the total thrust. Also assume that the relation between thrust and drag is directly proportional to spinning velocity, ie 10% more spinning velocity results in 10% more drag and thrust. From start consider that all 4 propellers spin at the same velocity, so that the total thrust produced balances the quadrotor weight. This is called hovering, the sum of the propeller forces and torque is a force compensating for weight and no torque.

First notice that 2 are rotating clockwise and 2 counter clockwise, in order to balance the drag torque that they generate along th z-axis. So if you want to exert torque around the z axis you need to have the even propellers spinning more (less) than the uneven one. If you spin the even ones by 10% more and the uneven one by 10% less, the weight is still balance but a torque around z-axis is exerted. This would describe the yaw motion.

For the roll and pitch the reasoning is equivalent, so I will only present one. Consider that the pitch corresponds to the rotation around the y-axis [a]. The propeller 1 and 3 being located on that axis have obviously no role in the toque generation. Then the drag torque generated by the propeller is around z-axis so it's also not affecting the pitch motion. The torque generated along y for one propeller (2,4), is depending of two quantities the distance between the propeller center (where the force is exerted) and the thrust produced by the propeller. In general of their vector product but for the co-planar case one can just consider the thrust magnitude and the distance in the plan. So from the hovering condition if you spin 2 faster (an reduce all other 3 accordingly) you will get a negative pitch, quadrotor flying toward x negative. Conversely spinning less will generate positive pitch quadrotor flying toward x positive. The fact that the position change is due to the dynamical coupling and underactuation of quadrotors. But in general due to the high symmetry of the platform one augment the velocity of 2 and diminish the one of 4 (or the converse) at the same time to exert higher torque but most importantly to make the total thrust balance simpler.

Note that some people consider other frame conventions, like NED or with the frame not aligned with the propellers but the points between to propellers. The discussion remains the same, it's all about balancing force with the total thrust and playing on differential to exerted desired torque.

I hope this is as complete as possible without being cryptic, feel free to interact with me to refine my answer.

[a] note for aeronautics enthusiasts, as the frame is not following North East Down convention positive pitch do not match to "rise" of the flying vehicle as it would be the case for a plane

Not the answer you're looking for? Browse other questions tagged quadcopter torque motion or ask your own question.

4
Quadcopter instability with simple takeoff in autonomous mode
4
How is it possible to maintain the total thrust when controlling yaw of a quadcopter?
4
How do safety cages around quadcopter rotors/blades affect lift capabilities?
3
How to calculate the current consumed by a brushless motor on a quadcopter
2
How do I if know my quad is powerful enough to take off vertically smoothly and how do I calculate max Thrust(g) for given current(A) and voltage(V)?
2
Building a quadcopter, what motors, props and what are the calculations?
0
Doing a project for college for a manned drone theortically only
1
Quad-rotor 1-D Linear Control Simulation with MATLAB
0
Quadrotor dynamics: How is torque created