How to locate an object on a known surface

I am building a small robot on wheels. The robot will be moving at a small speed in a square area of known dimensions. I need to locate the robot and know its position at any given moment so I can correct its trajectory. I can add parts to the robot, like some sort of flag or lighting object. It's preferable not to put any border around the area, since it would limit the flexibility of the project.

I thought of triangulating the position using two ultrasonic sensors placed at the two edges of the field. Although I am not sure if the US sensors will provide a sufficient angle and range to cover the entire area. I am also concerned about the precision.

Someone pointed to me that I could use two infrared sensors placed at the two edges, and make them turn 90deg both ways and scan the area. As soon as they find something, the position of the object can be found using triangulation. Although I still don't know if these methods work well for a moving object.

If you think that one of the methods that I described is the way to go, please give me more insight on how to implement it in my project. 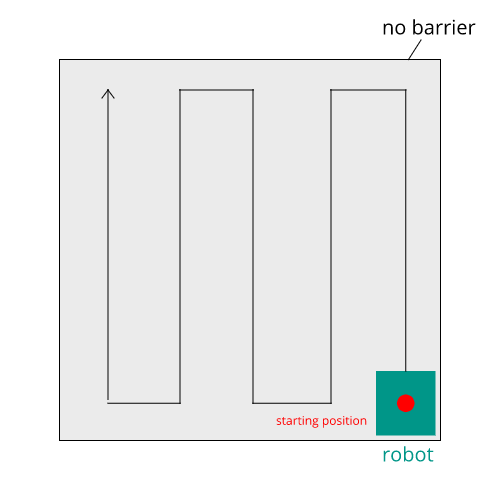 I am very new to robotics, therefore I would really appreciate a detailed answer.

Robots usually locate themselves on a field using sensors. None of the sensors are perfect as they each have their own limitations; hence, the more sensors the better.

Here are some sensor options:

Generally the FTC (First Technology Challenge) robots that have good autonomous programs have at least four different sensor types that they use for positioning.

I suggest to use a color sensor and place some RGB colours in different parts as grid to let the robot know its position.

Not the answer you're looking for? Browse other questions tagged arduino sensors wheeled-robot ultrasonic-sensors or ask your own question.

3
Non-Vision Based Target Tracking
15
What is the cheapest / easiest way of detecting a person?
2
Detect road surface in a traffic scene point cloud
5
Are there surface texture sensors for integration in circuits?
0
Detect physical touch/hit
3
Robot detection in motion
1
If two ir proximity sensors or two ultrasonic sensors are kept face to face , will they give bad readings for interference?
0
How can I get the distance from a robot to a beacon?
0
Are there solid state directional sensors available?
2
IR Sensor to detect fast moving object