Why the bldc motor not able to move my water boat?

I have a 1100kv brushless motor from dys with a propeller as shown. 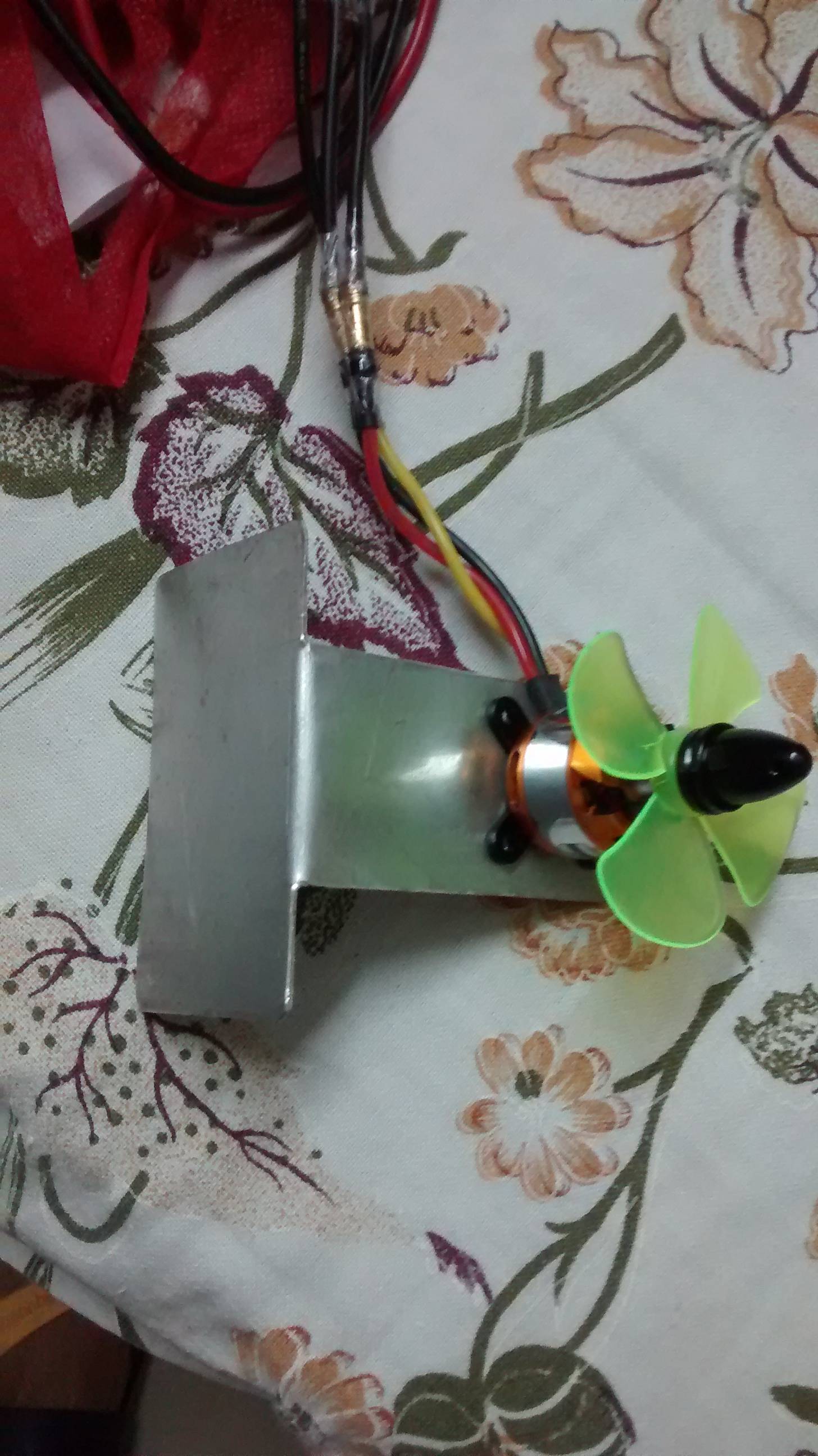 I have attached this motor to two pvc pipes joined together as shown and packed the electronics inside polyform to protect from water. 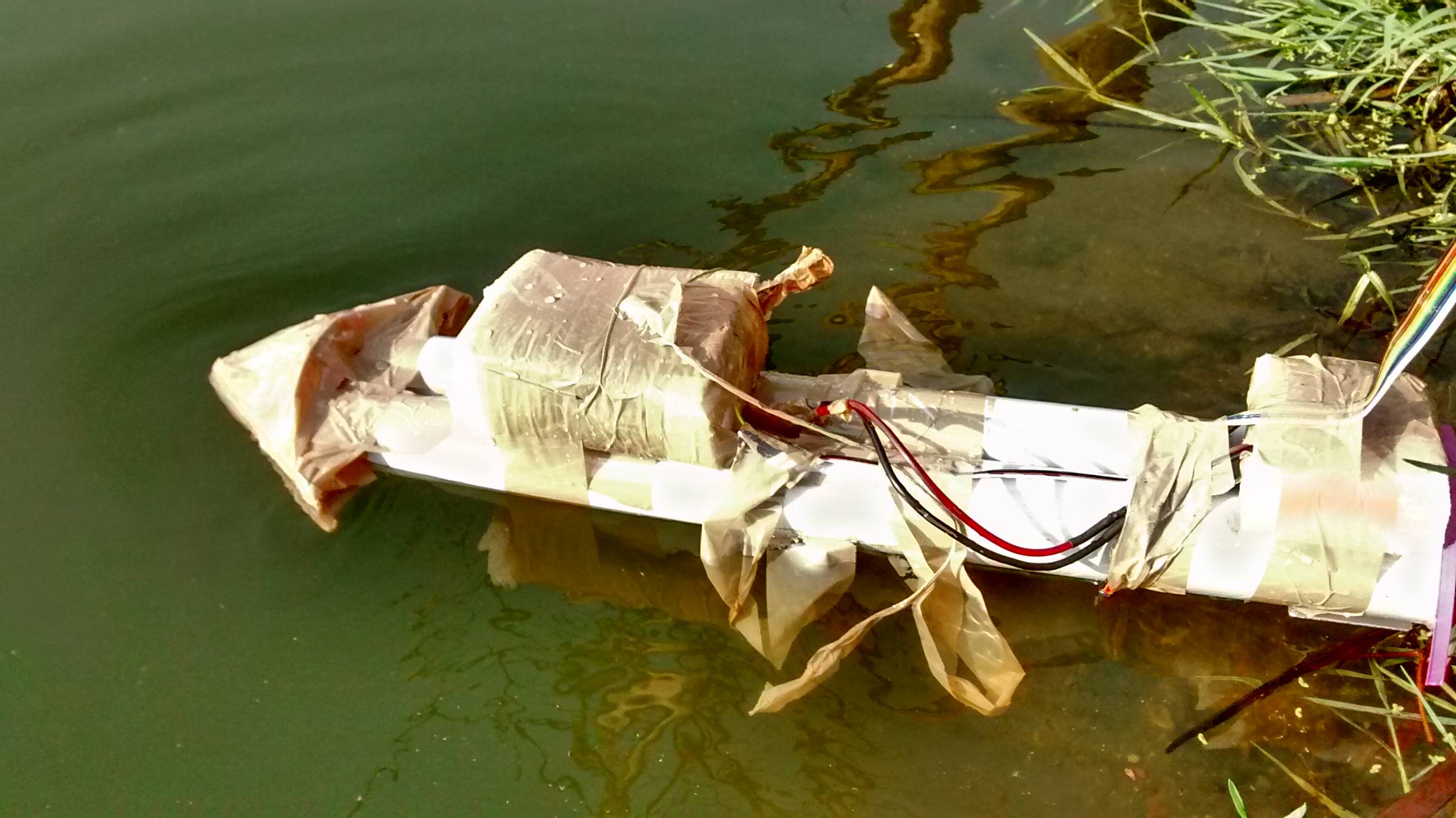 When I did the test run of this model the boat didn't move. The motor was just creating the turbulence in the water. So I your help of where I am going wrong 1. Is it wrong to place brushless motor in water(although have seen videos of people placing their motors in water) ? 2. Is the propeller design/size is wrong (maybe its a simple fan propeller not made for water, really no idea)? 3. Or the motor rating is not enough (thought lower kv rating would generate more torque and therefore more thrust) ? I used a 11.2V 2200 mah 25C lipo battery.

It sounds to me like you've got cavitation. Basically, the blades are turning so fast that the water around the blades boils. Boiling can happen at normal pressure and high temperature, like on a stove, or at normal temperature and low pressure, as in your case.

The blades boil the water, then the prop is surrounded by vapor instead of water and there isn't anything to push.

Here's a hobby thread on cavitation, where the OP complains,

I was driving my boat on saturday and I noticed sometimes my motor would spin very fast and the boat would go no where as if it were not spinning the prop.

and another poster replies, in part,

Cavitation is caused by the prop spinning too fast... You get something simular if the prop is 'too far' out of the water at some point. Lots of 'splashing', not much water moving.

(Emphasis added). That post goes on to say that it's not exactly cavitation, but it 100% is cavitation.

The problem with option 1 is that there is some "maximum throttle" at which you'll start cavitating, and then you're limited to the power and speed output of the motor from 0% to whatever that maximum throttle is. Even a low kV BLDC motor like you have still naturally spins very fast. You may have controller issues running a BLDC motor under relatively high torque at such a low speed.

Option 3 is probably not going to get you very far, because you'll probably find it hard to get a suitable prop installed in the correct location.

Of course, there's an option 4 also: replace the motor. You would want to go for the lowest speed motor you could find; something like a 100rpm motor would probably be perfect.

Not the answer you're looking for? Browse other questions tagged mobile-robot brushless-motor underwater usv or ask your own question.

0
How to use specific ESC,BLDC motor through Arduino Uno R3?
3
Driving sensorless three phase BLDC motor with Arduino and IMU
0
Why to seal a motor shaft, or the whole motor, for underwater ROV?
0
Is it possible to control the speed of a hoverboard motor[BLDC motor] with a raspberry pi? If so, how?
0
Connect LiPo battery to Arduino Motor Driver Shield for RC Boat