I am learning how to make rigs for high speed motion control. Basically, whatever action needs to be executed must be done by a rig that is triggered at an exact moment.

In this particular case, I need something that pulls out extremely fast, so that the element that is on top falls without any alteration.

In these two pictures I've highlighted the rig that is being used: 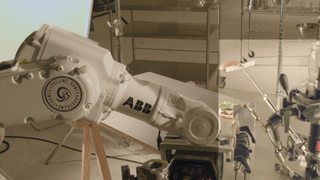 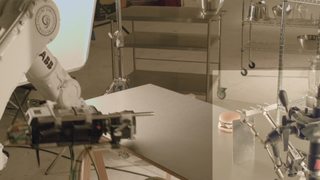 Zoomed in on the relevant sections:

This action happens in 1/2 a second, give or take.

What is the motor capable of pulling out that fast, without altering the object on top?

In this case the burger bun falls intact, it lands perfectly.

This looks to me like a linear pneumatic actuator.

Pneumatic cylinders can be very fast acting, depending on the air pressure on hand, but they can be hard to control at any position other than their end stops, so they are usually used to switch between a limited number of fixed positions. Although the actuators themselves can be small, they require significant infrastructure to run (air compressors, filters, pipes, valves, pressure gauges & limiters etc.).

Simple pneumatic actuators have valves which direct either atmospheric pressure, or pressurised air into the cylinder, so you might have one pneumatic solenoid valve for a single acting cylinder, while for a double acting cylinder you might have two pneumatic solenoid valves or a single three-way value depending on whether you want to pre-exhaust for faster actuation.

To answer the other part of your question. This system basically performs the Tabelcloth Trick with a burger bun. All you really need is for the mass of the bun, and thus it's inertia, to be high enough that it stays in place against the friction of the mechanism which hold it, for the time it takes for that mechanism to get out of the way.

The higher the jolt (or jerk) of the move, the more likely it is that the kinetic friction will dominate over the (usually higer) stiction (static friction), and a pneumatic actuator with no flow limiter has the potential to have quite a high jolt coefficient.

Not the answer you're looking for? Browse other questions tagged motor kinematics mechanism identification or ask your own question.

3
What is the name of this mechanical linkage?
2
Is this gear design feasible?
1
What type of mechanism is this?
7
I want to control a sewing machine motor; need help with choices
0
Need help regarding odometry using Encoder motor and raspberry pi
2
Need super-basic help with motor encoder
2
What the name of this kind of computer vision?
4
What is the difference between DC motor with encoder and DC with out encoder?
0
Unlabelled pins on this L293D dual DC motor driver
0
What are the parameters that I need to consider when figuring out the horizontal viewing distance of a camera mounted overhead for effective tracking?