I am currently working at a project involving a heavy disc rotating around its center. The disc weights around 2 kg and has a radius of 0,25 m. At every angle π/6, there exists smaller discs of masses from range 0,1 kg to 1 kg 0,15 m from the center. The radius for these are 0,05 m. A picture to illustrate: 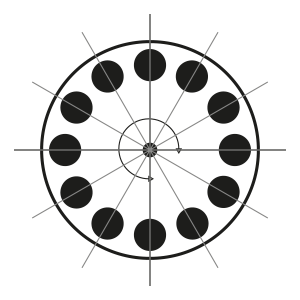 I have roughly calculated the moment of inertia when all smaller discs weight 1 kg. Using the formula for a circular plate and Steiner's theorem, the result is:

Now I want the disc to be able to spin and stop at these specific angles. Say for instance I want the disc to rotate from 0 to π. This means I need a precise way to control my disc. My plan is to use a servo and some gears to drive this. I need the disc to turn 180° in at least 3 seconds (preferably less). With this angular velocity and inertia, I have realized it might not be the easiest thing to stop this spinning wheel, let alone accelerate it. Here is another image: 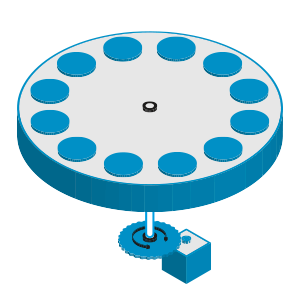 The motor does not need to be positioned like that, it would also be possible to drive the disc by positioning the motor on the edge of the disc for example.

What kind of motor should I be looking for, how would I handle stopping the disc? I am looking for general tips on how to accomplish this.

Some of the issues here are the same as in Rotate (and stop) a large disk in very tiny increments, and some are different. See the second answer there for drawings of one possible arrangement of the motor driving the plate.

I think it would make sense to use parts that now are widely used for 3D printer axis motion, such as Nema 17 stepper motors, encoders, timing-belt pullies / sprockets, and timing belts or timing belt material. If a timing belt wraps around the 25-cm disk and then is driven by a 1-cm timing-belt pulley flanked by two tension idlers, the 25:1 mechanical reduction drops the required motor torque into the range that Nema 17 stepper motors can handle while running at a speed high enough to meet your requirements.

Note, running the stepper motor at a given angular-acceleration rate implies accelerating and decelerating it, vs immediately starting it out at 250 RPM. That is, you would start out sending a fairly slow train of pulses to the stepper; during 1.5 seconds increase to maximum rate of 500 RPM; then for 1.5 seconds decrease the pulse rate back to zero. Without stepper acceleration and deceleration, you risk losing pulses, which would lead to inaccuracy, due to exceeding stepper motor torque limits. [Note: edit 1 revised this paragraph]

Note, it would make sense to have an encoder attached to the large wheel, to track its position rather than depending on open-loop operation of the stepping system.

3
Rotate (and stop) a large disk in very tiny increments

3
How do I interpret these specs for a motor and motor driver?
1
How can I dynamically control the amount of torque necessary to rotate something for a test rig?
3
Rotate (and stop) a large disk in very tiny increments
2
Motor for a hydraulic pump in a hydraulic system
1
An easy way to exert desired load on a motor shaft?
3
Moving a small plate back and forth
0
DC gearmotor stall current and battery capacity
1
Calculating torque required to rotate a platform
1
Q: Motor sizing for reeling application