I'm a beginner in controls system, so if there is a nice tutorial on this, please let me know. 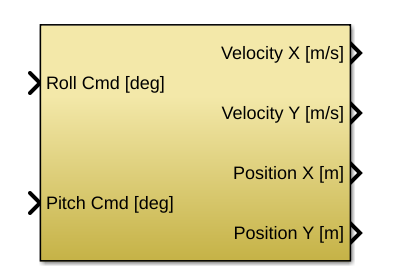 It takes roll and pitch commands and output velocities and positions. I want to create a PD controller so that the quadcopter in the simulation can move in a 10x10 meter shaped square(starting from bottom left corner) in a clock-wise direction.

I'm not sure how to go about this so I've been watching Vijay Kumar's Ariel Robotics lectures on Coursera and it seems like I need to create desired position, velocity, and acceleration at every time step which I think I can do (make a trapezoidal velocity profile and compute the rest).

Then Kumar talks about a nested control structure where there are two controllers: a position controller that takes in the desired position, velocity, and acceleration; and there is attitude controller which I believe is the one I have. 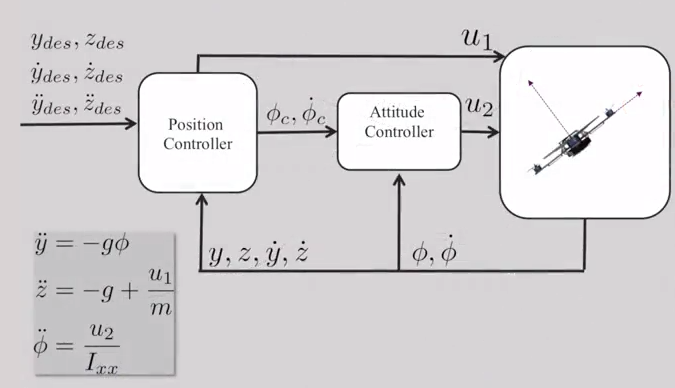 As you pointed out the typical control loop for a quadrotor is a nested one, with a position controller and a orientation controller (I prefer to use orientation instead of attitude to avoid confusion with altitude which happens more often than not). If you want to find some literature the set up you describe is often referred as P-VTOL , for Planar Vertical Take-Off and Landing.

is the position controller the one that converts my desired position,velocity, and acceleration into a roll/pitch command?

That being said in the model you posted (first figure) you have as input pitch and roll commands, which is not possible in the planar case as in the plan there is only one angle. Usually for PVTOL system input are chosen as the total thrust ($F$) and the torque $\tau$ (as in your second figure) or as the two thrust $f_1,f_2$ produced by each propeller. The relation between the two is simple and linear

Also note that from your second pictures it seems that you want to control at the same time 2 positions (y,z) and the orientation. This is impossible as the PVTOL is underactuated and only has 2 control inputs, you can either control the 2 positions but not the orientation or 1 poisiton and 1 orientation (usually z and $\phi$). The typical approach for near-hovering flight and non aggressive maneuvers is to give desired trajectory for the 2 position.

how do I create a position controller?

Here I will sketch the basic rationals behind the position controller. Consider that you have an error in position along both axes $e_z$ and $e_y$ to make it disappear you need to move your platform in the direction defined by the vector $\begin{bmatrix} e_y \\ e_z \end{bmatrix}$, this gives you the desired orientation of your total thrust vector, ie z-axis of the PVTOL, that needs to be fed to the orientation controller which will compute $\tau$. The magnitude of the total thrust is usually regulated via PD on the errors, this directly defines $F$.

7
Position Controller for a Quadrotor

7
Position Controller for a Quadrotor
2
Implementing a position control for UAV through a flight controller. Plant model is unknown
7
how to implement and code inner and outer PD controllers for quadrotor for position tracking
2
Quadcopter PID: Controller is Saturating
0
Quadcopter: X-Y Velocity PID Controller
4
How to implement PD controller to this 2D planar quadcopter dynamics?
2
Cascaded PID in Quadcopter control
3
Correct Quadcopter Yaw control implementation
0
Quadcopter stable with angular velocity but not with absolute angle
3
Motion profile and Motion control scheme, how do they interact?