I have two series' of points recorded using the whole setup that I am trying to use to compute this transformation (from one world frame to the other world frame).

If you're not familiar, it is possible to compute a transformation between two frames given a set of points in each frame.

But I'm getting wonky results: 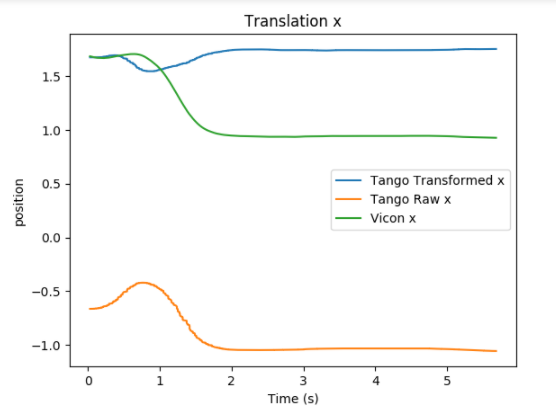 If it's not clear, if the transformation were working correctly, the points labeled 'transformed' displayed on the graph below would roughly overlap with those labeled 'Vicon'. As you can see, they only overlap for less than half a second.

Any suggestions? Ideas about what could be wrong?

Turns out I was transforming before interpolating the data, and my interpolation function assumed that the two streams of data were taken at the same time stamps. A simple mistake. So I was comparing data from different points in time. Consequently, it makes sense that resulting fitted transformation was incorrect.

@Chuck -- The resulting (correct) transform could indeed look like it involves scaling because I am dealing with 3-D data. Above, only a single axis of data is displayed. When rotating a a vector from one frame to another, the magnitude of the x-component may very well change -- what falls along the 'x-axis' depends on the frame definition.

Not the answer you're looking for? Browse other questions tagged quadcopter frame or ask your own question.