Lately I've been thinking about 6 axis robots and noticed that all examples that I've seen on the internet use the same configuration of axes: 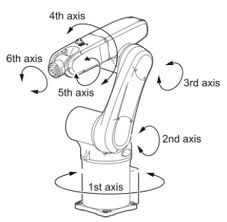 This means at least three different types of joints, one for waist (1), one perpendicular (2, 3 and 5) and one parallel (4 and 6). I was wondering if comparable range of motion can be achieved by having only one type of joint in addition to waist.

I thought that having only axes perpendicular to previous segments (like 2 and 3 in the picture), but instead of consecutive pairs of axes being parallel to each other, have them twisted by some fixed angle (45 degrees?) relative to each other.

Would an idea like this work? Would it have any significant disadvantages? Is there some general method to visualise what positions can be reached with a given configuration of axes?

The sketch seems to represent a Kuka KR60-HA, doesn't it? First of all, one might ask oneself, why, for instance, the rotation axis of joints 4 and 6 is the same. My ad-hoc answer would be that Kuka KR60-HA is praised for its high accuracy and "highest performance in terms of cycle time".

These characteristics almost answer the second part of your question, namely, if the the work space can be reached with a different configuration of joints. Suppose, it does, but if you get back to the first part of my answer, you'll see that kinematics (accuracy, reachability space) only is not enough for production environment, you'll have to invest in dynamics -- performance in terms of cycle time, which can make "consecutive pairs of axes being parallel to each other" necessary.

If you like fancy reachability maps, try out these examples

Not the answer you're looking for? Browse other questions tagged robotic-arm geometry or ask your own question.