What kind of sensor do I need for knowing that something is placed at a position?

I have a small device that's picking up small rocks from a pile and moving them to another place. Its a kind of crude way of trying to push the whole pile onto a bigger gear and hoping one of them is pushed to one of the spaces between gears and taken around and falls off on the other side of the spinning gear. Here I want to know if the machine successfully got a rock here, if not it should spin the gear until it turns up a single rock on the other side of it. If a rock is present at the spot, the gear should stop spinning until the rock is taken care of by the rest of the machine.

What kind of device can I use to sense if I successfully succeeded in getting a rock on the other side of the gear? 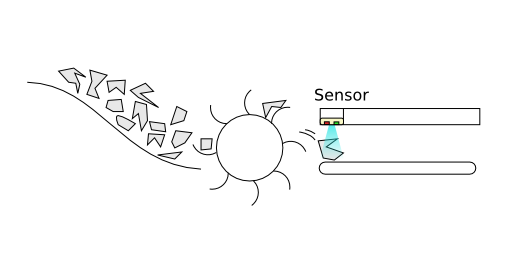 This is just a part of a bigger system. To sum up, I need the sensor to signal when a rock is signaled out and separated from the rest so it can continue work on that single rock.

I am building this using an Arduino to move the gear around, so the sensor needs to be something that can be controlled by an Arduino.

There are numerous options that could/should work here.

As mentioned by Elias, an IR sender/receiver is a good choice. This is similar to a "break beam" sensor. Essentially, when the beam of light between the transmitter and receiver is broken, the controller knows to do something about it. Similar to this would be an IR distance sensor, which records the distance from the sensor to an object by way of the angle of the light reflections. The problem with any sort of sensor based around light (such as IR) is that it can be "corrupted" easily by ambient light: the sun, light bulbs, camera flash, etc. The way to get around this is to pulse the light, only looking for light of a specific frequency (this is how IR TV remotes work).

There are also things such as ultrasonic rangefinders which use sound instead of light: http://www.acroname.com/robotics/parts/R335-SRF06.html

At the most complicated level, you could have a camera mounted that detects when a rock has been moved.

Alternatively, you could use a physical sensor to tell when a rock has been moved. This can be as simple as a push button platform - the button is pushed down when a rock is placed on top of it. Of course, this would only work if the rocks weighed enough to counteract the spring inside of a push button switch.

As far as the type of sensor that can be used: Arduino is based around an AVR microcontroller. Microcontrollers can be used with pretty much any kind of sensor you can imagine, although some may be too fast to be handled by the slower clock of an micro-controller versus a micro-processor or require more processing power than is available.

Try an IR sender and receiver, facing each other, and the connection is obstructed by the rock. 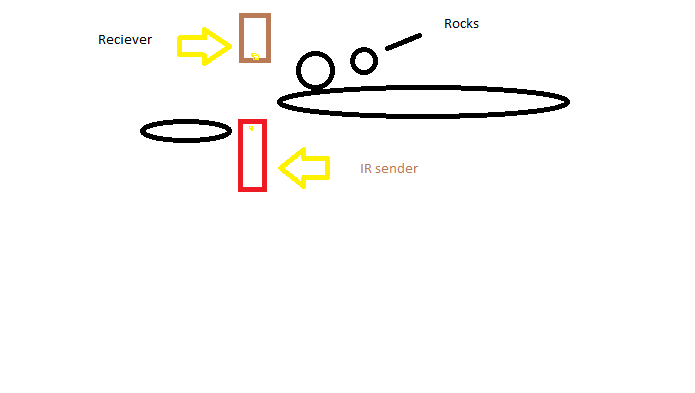 I would put the whole conveyor belt on two axis, and:

Because of the height between the spinning gear and the belt, the rock's impact will be powerful, making it easy to find a switch button that can detect it.

It is very cheap and robust to dust/misplacement. 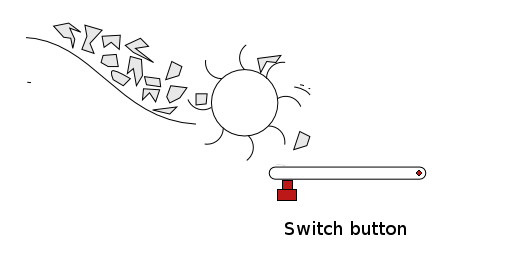 IR sensor are best used for detecting any thing but they are quite sensitive to IR lights and sunlight.So if in condition when you are not bothering about Ir rays and sunlight , you can always use a pair of IR LED and Photodiode to make a pair of IR sensor.

Not the answer you're looking for? Browse other questions tagged motor sensors or ask your own question.

4
How do I adjust objects on a conveyor belt into the proper orientation?

2
Overview - what skills are needed for sensor fusion?
4
How do I adjust objects on a conveyor belt into the proper orientation?
3
Sensor for tracking relative position of human
0
What kind of sensor do quadcopter uses?
1
For a quadcopter do i need to place the gyroscope sensor at the center of mass?
0
What kind of distance sensors should I use for outdoors applications?
0
I need to make something that can slam something into something else really fast in both directions