What is the direction of current flowing through the freewheeling diodes in H-bridge if I use BJT?

I am new to electronics.the question is buzzing in my head since i first saw the H bridge configuration.please answer the question briefly 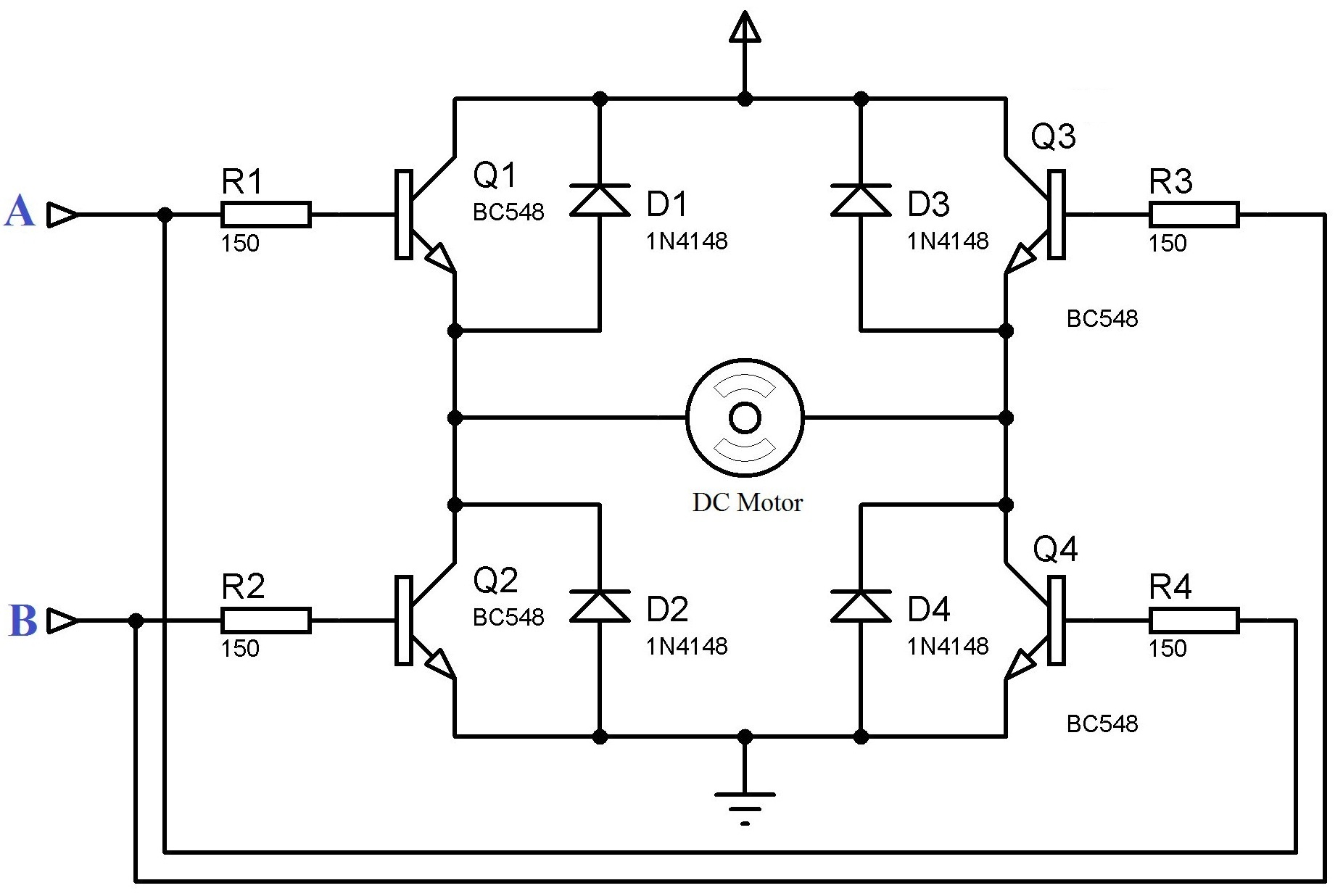 Basically (in reality anything have a sligth aspeact of everything else, nothing is ideal) the DC motor is mainly inductance in serie with small resistance.

When PWN is on, Q1+Q4 are open and current goes to DC motor from left to rigth. It start to rotate (or increase rotation when rotating) (slowly as incductace resist change of current, mechanical inertia also works against change). Nothing fancy here. Current goes PWR-Q1-DC-Q4-GND

Then the PWM goes down, Q1+Q4 closes, but morot is rotating (mechanical inertia) and its inductance tries to force current thru from left to right. At the moment it behave as dynamo (or a battery) and voltage goes so high so to force the current of the same value and direction.

But the DC (and everything else) have some resistance, which burns the energy and its inductance have only limited capacity (even if enforced by mechanical inertia of rotating motor) so the current goes slowly down (and will stop eventually as the DC motor would slower so much, that there would be not enought voltage to open diodes and overcome main battery at the same time).

But your PWM goes up again much sooner thant this stop happens, so the DC just slows a little and those Q1 and Q4 opens and main battery suplies current again which forces the DC to rotate faster.

The rate (speed) of PWM is so fast, that mechanical inertia makes that invisible and only statistical difference matters here.

Dependind on the time the PWM is on(up) and time it is off(down) the DC motor have just part of the maximal possible power and so its rotation is slower then maximal possible. As on open Q1+Q4 there is full current from battery it have much better force to move, than if you limit the current with eq. resistor. (if goes full strenght for moment, then no strenght at all instead of going only half streng all the time - so it is able to overcome more resist of environment, even if it is not able to rotate fast) 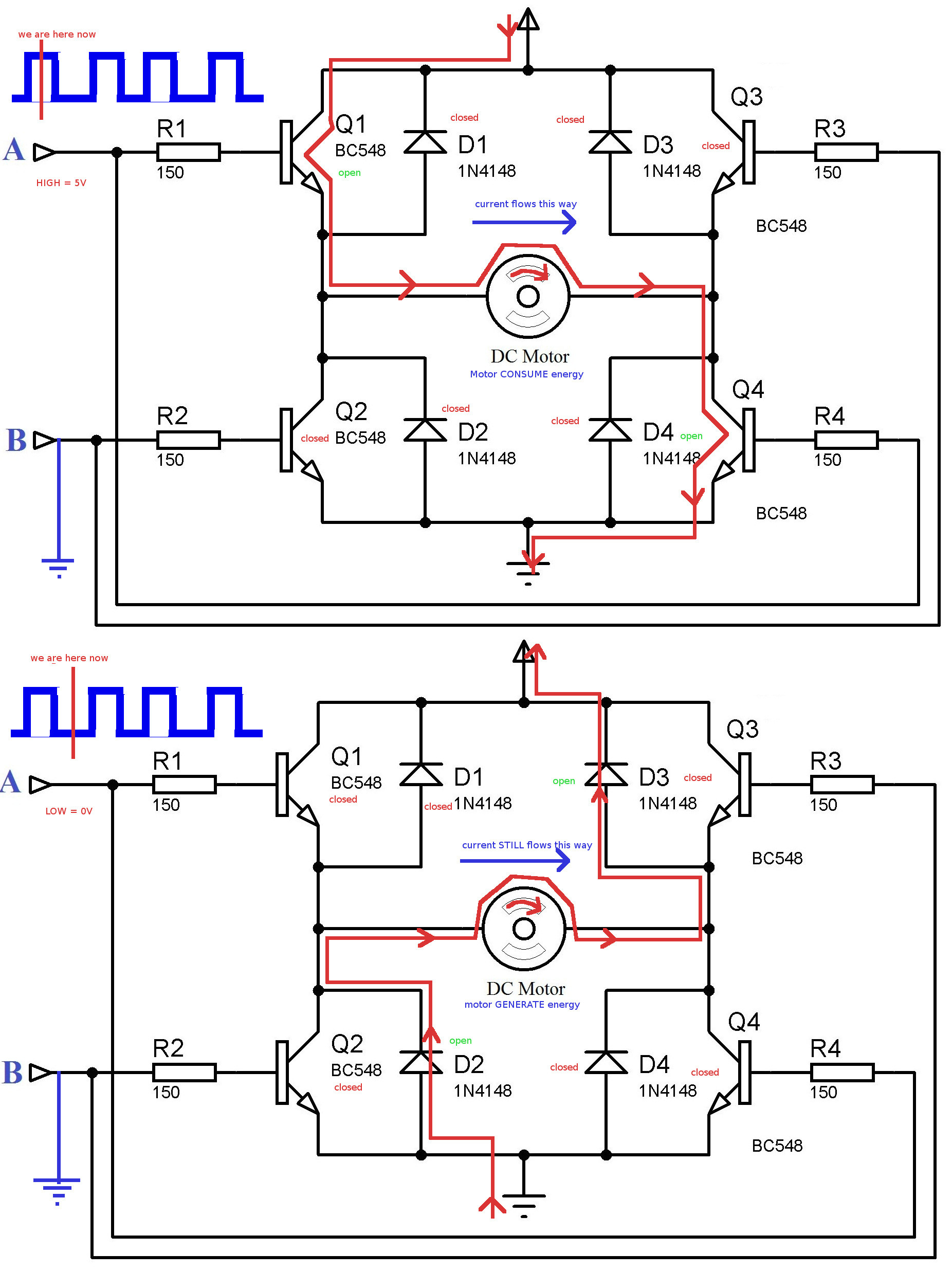 when A is H-Level and B L-Level then Q1 and Q4 are in the saturation region so the current flows in the direction as follow: 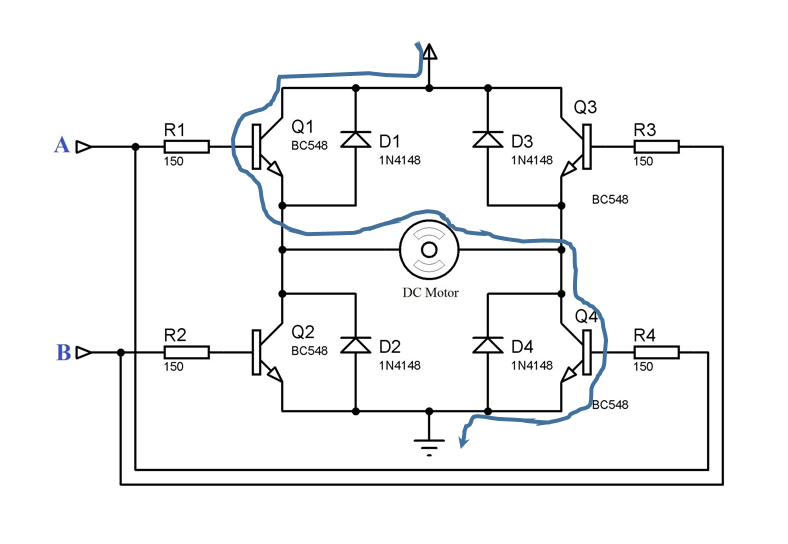 on the other option: A is L-Level and B H-Level 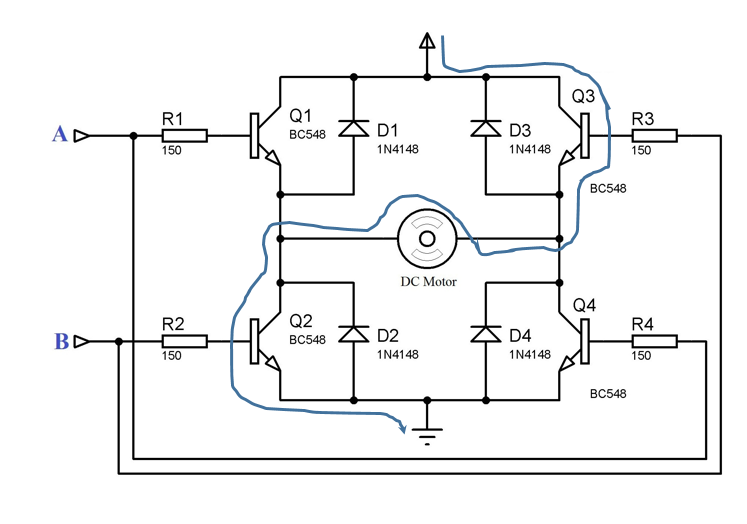 the rest of the options: A=B= H-Level or A=B= L-Level are not going to move the motor

q1 and q3 will never really turn on if the voltage applied to A or B is less than the motor supply voltage, NPN transistors require that the base voltage is greater than the emitter voltage by 0.6v, lets say without the motor running its emitter is sitting at a random value of 2v, when you apply say a 5v signal to it, the emitter will then only every rise to 4.4v

Not the answer you're looking for? Browse other questions tagged h-bridge or ask your own question.

4
What is the purpose of electronic braking in motors?
3
DC Motor to open a door
0
Recommendations and Advice - Motor Driver for 12V Gear Motor with Magnetic Encoder
0
6 motors with TB6612 driver + power requirements